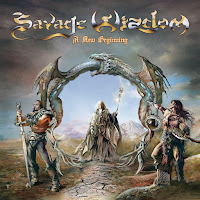 SAVAGE WIZDOM
A New Beginning
Independent
http://www.facebook.com/savagewizdom
This is straight down the line European style Power Metal that reminds me of Helloween and Hammerfall with some added classic Metal flavours injected for good measure like Iron Maiden and Judas Priest.
It’s hard to find much in the way of history or information on the band, But oddly enough the band hail from New Mexico (USA) and have been around for a while starting up in 2004. It shows too… To create metal of this caliber takes time and countless hours of dedication practicing those warp speed guitar scales, this is nothing short of brilliant in terms of musicianship and professionally. Immediately upon commencement of this album it is apparent there is some unbelievably talented personalities involved, light speed riffing and soaring majestic vocals and captivating song wring are the order of the day. Glorious stuff indeed for power metal fans and anyone who plays guitar out there.
Generally speaking I don’t follow the underground of power metal, I like the genre-leaders but don’t dwell into it much further than that. Non fans of power metal may find this a bit pompous and over blown but I think it crosses over quite well into traditional metal territory as well, and fans of Maiden / Priest etc would do well to listen to this. The whole album stayed interesting from start to finish as opposed to some power metal albums which tend to dissolve into self-indulgent wankery, this one thankfully does not.
Overall and excellent listen, well produced and executed and ultra-professional. I will definitely be keeping an ear out for this band in the future! -Reggae