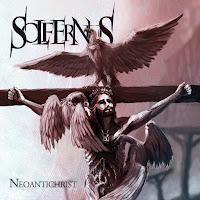 SOLFERNUS
Neoantichrist
Satanath Records
Release Date: October 13, 2017
Co-release with MurdHer Records
Solfernus, originating in the Czech Republic, started out in 2002. It would take until 2007 when I was finally introduced to their album Hysteria In Coma. As a lover of Black Metal, I was instantly taken with this band and their unique sound. Some tracks on the album I reviewed, Neoantichrist, even have a Spanish guitar feel to them. The album's track list transitions well and the entire album was pleasing to the ear. Of the tracks, my personal favorites were Between Two Deaths, Neoantichrist, and Stone In A River. Ever the fan of Satanath Records, I've actually grown the collection of bands I love by using Solfernus as a reference for new artists to obsess over. Paul Dread's drumming style is phenomenal, I've always admired a fantastic drummer. I'm convinced that Neoantichrist is my favorite Solfernus album yet. So, all in all, I absolutely loved the album, the percussion, and the artist as a whole! -Astrid Viridian