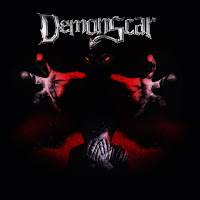 DEMONSCAR
DemonScar EP
Independent
Country of origin: USA
Genre: Heavy rock, classic metal
Release date: September 8, 2017
This is the first official EP released by DemonScar, following four singles they released in 2017. Three of those singles were songs recorded for the EP; the fourth was a traditional Christmas hymn. I have little background information about the band, except to say they’re natives of Manhattan. However the complete lyrics are available at Bandcamp which helps if you want a broad picture of where they are coming from. DemonScar’s sound has strong ties to rock, but this doesn’t mean you should expect something soft, polished, pleasant or palatable. What you get is somewhere between Black Sabbath. Motorhead, Metallica, old Motley Crue and Cycle Sluts From Hell, with a pervading atmosphere of nighttime surrounding the musicianship. Accompanying this is a slight hint of grittiness, indicating grimy city streets rather than the paved roads of Beverly Hills. But this is only to enhance their edge and you won’t find it excessively harsh. As far as the lyrics are concerned, DemonScar forego escapism by bringing life’s darker experiences to light, indicating that life is not all about partying and bedding members of the opposite sex. Though the lyrics are growled rather than sung, this approach works for the material, speaking of a drive to overcome said experiences and ultimately discover one’s own answers rather than dream of reaching earthly heaven. You get the revelation that you unknowingly sold your soul and wonder where it went, the revelation that you were deceived by other men through religion, the knowledge that circumstances are tearing you apart internally, the knowledge that things you believed were good for you are now dragging you deeper into the abyss. Demonscar write about hardships and their impact on the soul, but also maintain it’s better to confront them instead of pretending they don’t exist. In this sense they’re more likened to early grunge before it became a trend. Whether the lyrics make for a positive or negative experience is up to the listener. But I noticed that bands who look at life this way often have more longevity. -Dave Wolff