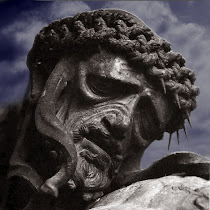 Band: Vasaria
Location: Manhattan, New York
Country: USA
Genre: Gothic metal
Single/Video: Adversary
Format: Digital
Label: Independent
Release date: July 20, 2020
Vasaria is one of New York’s best kept secrets, having released new material on an extremely infrequent basis since 1997. Frontman Baron Misuraca has been involved in several projects over the years, including Desecrator, Baron Misuraca's Retro Lounge, Sabinas Rex and Carnivore A.D. Those acts display Misuraca’s performing range and I recommend checking them out. It’s rather a shame Vasaria is an unsung talent since label and PR support would help bestow well deserved status in the doom and goth metal industries upon them. This lineup of the band also features Chuck Lenihan of Crumbsuckers, Genitorturers and Carnivore A.D. “Adversary” is the first single and promotional video they put together since the viral outbreak from last January, the manner in which it was compiled shows unusually fertile imagination and is an ideal example of how a band can utilize quarantine restrictions to their advantage. The sound quality is clear and professional for however it was recorded, and the overlapping shots of the band in the video presents impressions of a nightmare. “Adversary” integrates affectations of Black Sabbath, old Carcass and Moonspell, connecting them with 1950s horror movies like “Blood of Dracula” and “The She Creature”, Ed Wood fare like “Bride of the Monster,” “Plan 9 from Outer Space” and “Orgy of the Dead” and Hammer Horror like “The Witches” and “Kiss of the Vampire.” In thematic and aesthetic terms you can add Misfits to the list of comparisons, only while the Misfits were zombified greasers Vasaria’s presence is more likened to a fifteenth century vampire who began his undead life when Vlad III Dracula of Transylvania was still walking the earth. His voice and the accompanying music (particularly the keyboards) adds infinitely more weight to this imagery, so much so that listening becomes like entering Dracul’s castle and being entertained by his minions. “Adversary” can be viewed at Bandcamp (with lyrics) and Misuraca’s Facebook and Youtube profiles. –Dave Wolff
Lineup:
Baron Misuraca: Vocals, bass
Chuck Lenihan: Lead guitar
Evan Strumar: Keyboards, guitar
Scott Harris: Drums
Dave Wolff at 4:00 PM
Share