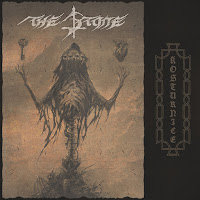 Band: The Stone
Location: Belgrade
Country: Serbia
Genre: Black metal
Full Length: Kosturnice
Format: Digital album, jewel case CD, LP (several colors)
Label: Immortal Frost Productions
Release date: March 26, 2021
It's no wonder these Serbs are so adept at the dark arts of Black Metal. You can tell since “Kosturnice” (which translates ossuaries) is their album number nine. This quartet has been around since 1997, first under the moniker of Stone To Flesh and given birth to a couple of demos plus a full length. Although, it seems to be something that did not fit or work with the first name of the group, because, in 2001 they shortened it to The Stone. Well, as any fan of the genre would want, this music pretty intense, sharp as the edge of a scythe, but at the same time melodic and contrived. A lethal dose of Black Metal, pack with a leather bell of eight bullets with cyanide on the tip. This album includes only two songs in English: “Tremors Beneath the Ground of the Charnel House” and “Engulfed by the Abyss”, listen to the latter because it featured such a killer riff that y'all might not want to hook out with him in a dark alley at two minutes to midnight. The rest of the songs are in the native language of the Balkans, a territory that once was crush by civil and political wars. Now I understand why The Stone sounds like ten war tanks heading to battle. Produced by the Belgian label that has thrown the house out of the window, giving the treatment on vinyl in three different colors, also on CD and limited digipack. –Jorge A. Trejos
Lineup:
Glad: Vocals
Kozeljnik: Guitar
Demonetras: Rhythm guitar
Vrag: Bass
Honza Kapák: Drums
Track list:
1. Pramaglina
2. Okamenjen
3. Kosturnice
4. Tremors Beneath the Ground of the Charnel House
5. Ime koje su razvejali vetrovi
6. Engulfed by the Abyss
7. Omnicid
8. Jebes pero, dodaj mac
Dave Wolff at 3:27 AM
Share