CD Review: HEPTAEDIUM “How Long Shall I Suffer Here?” 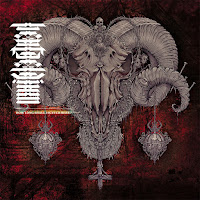 HEPTAEDIUM
“How Long Shall I Suffer Here?”
Apathia Records
To be released October 6, 2017
It's not every day I can say I've come across a new hybrid of genres styles I've never heard pieced together. HEPTAEDIUM's third studio album 'How Long Shall I Suffer Here?' is a refreshing eye-opener to the never-ending possibilities of music making. The album is a sprawling collection of short "snippets", I'd like to say, as opposed to tracks, which vary across the spectrum of sub-genres as diverse as Djent, electronica, progressive dubstep and Chiptune. Typically they have a sound that relies heavily upon the usage of samples, audio clips and instrumental music themes that are fundamentally fitful and intermittent. Keyboards are at the vanguard of their armour of instrumentation, with almost every song led by an arpeggiated synthesizer line. You can often be mistaken into believing they're going somewhere but much to one's surprise they take it to some place entirely unexpected. Often there's moments that aren't exactly "music" by one's conventional level of understanding, rather brief excerpts of white noise and computerized technical difficulties that almost led me to believe that my system had crashed while listening to it! More often than not you've actually got this steady 4/4 rhythm going on until the distorted guitars and organic snares burst in, arm-in-arm in unison with staccato flourishes that bend the rules of time signatures. Each song is unique in that they place emphasis on a different style. Pessimism rears its head with song titles such as 'When I Die... All Will Be Lost and Forever Gone' and 'If The World Would Stop Spinning I Don't Think I'd Miss It', which feature one of the most captivating hi-hat sounds I've heard in my life. They sound almost akin to a deck of cards cascading when accentuated in rapid succession. 'I'm So Scared' is heartbreaking and easily the most gentle piece on this album. Overall it's a challenging and unique release due to its twisting of genres and will appeal more to those with open minds as opposed to extremely devout fanatics of one specific subgenre. The fact that "kawaii" is a term associated with the group via certain sectors of their audience is a clear representation that they're anything but an ordinary metal group. -Jaime Regadas