WEAPONS OF ANEW
Killshot
OK! Good Records
It's nice to see older guys still trying to rock it out and these guys are definitely in their late 30s early 40s and they're still trying to make that last ditch attempt. Admirable. You can tell that at one point this outfit was a real metal band. Or they individually started out that way. They dig metal, they really enjoy it but, somewhere down the line an A and R guy got hold of Weapons of Anew and told them, "You got to pop this up, you got to make this more palatable if you want to sell." Hence the male Evanescence quality to this band's sound. You got it all going on here: high harmonies, smooth as glass production, pretty boy lead singer and it all leads to a kind of vapid, empty candy floss sound that leaves you wanting a Thanksgiving dinner to fill you up.
I get it, I get what you guys are trying to do, and it's understandable the music business being what it is in 2016. It's full of cookie cutter silky production numbers masking as hardcore rock music whether it be punk or metal in their various genres. But you all are old enough to know better; seriously. For starters, the jarring insertion of a Punisher T-shirt on guitarist Freddy Ordine. This is a video, your identity is all out in the line here - it's your calling card. Define yourselves. Don't let their stylist dress you, you're not a 14-year-goth girl. Wear your own clothes you're like a 40-year-old dude. And by the way that's cool and that's seriously metal to be an elder statesman of rock. You're a veteran of the road, you've been through some deep shit, own it - tell us about that stuff. Hell, look at Slayer, listen to the last Motörhead album. Watch the guys that are out there playing it now - they've been through the wars. There's some kind of sonic gravitas in being an older metal band; don't try to make yourself something that you are not to please others because you just don't fit the demographic. Let it go, let it be loose and be yourself because I really think that this is not you.
Don't get me wrong; it's a really good song and I like the idea, I like the video 'Killshot'. You put a woman in a physically powerful position even if she is showing our hero 'no mercy' and he's begging to be put out his misery. Weapons Of Anew really put themselves out there; a lot of older guys wouldn't want to show themselves so much in a video but your good looking you still are rocking the slight figure of the hungry musician. I get it, it makes sense, but at the same time I would have preferred to see something from WOA that's a little bit more dirty and deep. And what are we trying to say here? That some girl cut you to the bone? You do understand this is a 22-year-old guy song. This is the song a guy sings he's just starting to branch out into the world of love. You guys have been around the block a bit and I'm thinking a girl cutting you off at the knees is not gonna have the same affect on you as a young dude. So maybe you handle this subject matter a bit differently and frankly in a more worldly and interesting way.
The musicianship is there - Chris Manfre on drums is particularly outstanding. And I see where this could sort of spill over into an Avenged Sevenfold pop metal, but the iron just isn't there. And your man Ray West with the gravel scream - dude it's STILL IN YOU - clearly!! Don't let someone tell you that you need to clean it up to make a record. I am frankly appalled at the production, the sound is so cold - I can't attach to this song in any way.
Look, I'm in my late 40s I'm not saying that, you know, older people shouldn't be out there rocking it, but you should be authentic and true to yourself and not true to some ANR guy’s idea. That being said, keep going you guys are great musicians and I love the meat of what you have here. But make it steak not sushi. Take a step back, reevaluate and come back out there with something that's filthy because that's what's in your souls - I can feel it. -Heather Dawson

Posted by Dave Wolff at 7:34 AM No comments: 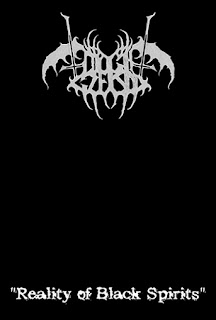 DUCH CZERNI
Reality Of Black Spirits
War Productions
http://warproductionspt.bandcamp.com
Poland’s Duch Czerni have released a series of cassette demos, splits and EPs under different labels and distros since their formation in 2013. 2016 saw the release of two demos entitled Reality Of Black Spirits and Bezdnia. I discovered this band through War Faust of War Productions and while I was researching them I found Reality Of Black Spirits is a collection of their past two EPs: 2015's Cienie Wiecznego Zmierzchu and 2016's Widma Czarnych Dusz. The band is two core members: guitarist Maciej "Azazoth" Szewczyk who plays guitar for the Polish black metal band Cthulhu Rites (inspired by the writings of Lovecraft) and drummer/vocalist Wened Wilk Sławibor who is involved in Cthulhu Rites, Blood Stronghold, Ravenmoon Sanctuary, Nocturnal Werewolf and many other Polish acts. This is Depressive Suicidal Black Metal at its most depressive and suicidal with somber, melancholy guitars, heavily distorted, hypnotic guitars and excruciatingly tortured vocals. Violin and keyboards added for additional drive. You can only imagine how fathomless and down reaching the chasm from where this demo originated is. If you dare to search and you’re not faint hearted this atramentous band will appeal to you with this invocation to all things lightless and doleful. My sole grievance about these four recordings s that the drums tend to be mixed too loud, but thankfully they don’t overshadow all else going on and there are some moving mood turns within each song. Take the transition from distorted guitars to forlorn strings in “Cienie wiecznego zmierzchu” for example and the unremittingly trance-inducing theme of “Powrót świata umarłego” which slowly fades out at its conclusion. This and more shows a lot of innovatory punch on the band’s part, that I hope they raise the bar on when work begins on their next release. -Dave Wolff
Track list:
1. Cienie wiecznego zmierzchu
2. Ponura noc wieczności
3. Aura melancholii posępna
4. Powrót świata umarłego
Posted by Dave Wolff at 10:04 AM No comments:

Interview with GRAVEHUFFER by Dave Wolff 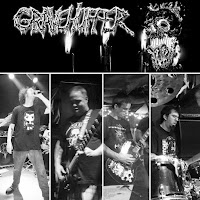 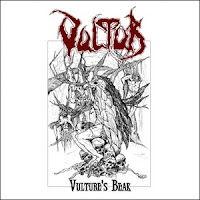 VULTUR
Vulture’s Beak
War Productions
http://warproductionspt.bandcamp.com
Vulture’s Beak is the debut demo from this Athens based death metal band. Released three years following their 2013 inception, it effortlessly demonstrates how the metal underground in Greece is still capable of spawning quality music. The four selections gathered for this demo refreshed my memories of old Pyrexia and Suffocation in their demo days. The guitar, bass and drum tracks were all recorded in the band’s home studio (the lead vocals were recorded at Vocals recorded at Underground Studio of Kyriakos Pagoulatos) so the similarities probably stem from the professional self-production heard on this demo. The D.I.Y. leaning ingrained in the material is revitalizing as Vultur hold clear dominion over their songs, channeling their energy into the density and consistency they compose with. The Pyrexia/Suffocation parallels are most apparent in the first track Entangled In The Webs Of Fear, but from there Vultur travel to other shores so to speak. The predilection here is of the 90s persuasion, with all its doom, gloom and foreboding untouched. I liked how this innervation seems to steadily grow until the end of the demo when it seems to almost become self-aware in a sense, signaling the end of all things as we know them. With this in mind I most appreciate the final track Incubation Of Grimness with its agonizingly slow tempo and imposing fadeout suggesting darker times ahead. This fits the potential the band has and shows promise for them. -Dave Wolff
Track list:
1. Entangled In The Webs Of Fear
2. Vulture's Beak
3. Murder Castle
4. Incubation Of Grimness
Posted by Dave Wolff at 3:10 AM No comments: 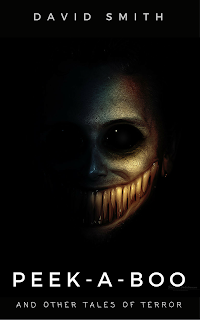