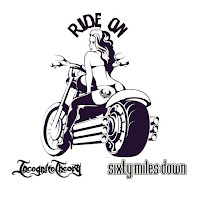 Band: Incognito Theory
Location: Kearny, New Jersey
Country: USA
Genre: Southern groove metal
Single: Ride On (Featuring Sixty Miles Down)
Format: Digital, video
Label: Independent
Release date: January 23, 2023
First of all something needs to be said about this dope as fuck old school art Incognito Theory is bringing to the table here! Really kickass job to whoever decided on that! I know it's nothing original but very memorable nonetheless and the music really goes well with it! I’ve never heard of “Groove Metal” but if it's sexy ass tattoos and motorcycles I’m in! I listened to “Sunset Moonshine”, which seemed totally different. Both definitely have sort of an early 2000’s metal vibe that reminds me a lot of bands like Disturbed. -Brynn Kali StarDew
SongWriting: 8
Musicianship: 8
Memorability: 9
Production: 9
Overall: 8.5 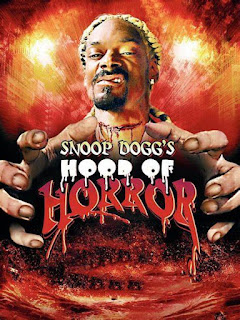 Snoop Dogg’s Hood of Horror
With Snoop Dogg, Daniella Alonso and Anson Mount
Written by Jacob Hair and Tim Sullivan
Directed by Stacy Title
First release: Los Angeles Film Festival, June 27, 2006
Snoopadelic Films Inc., Social Capital, BloodWorks, New Rebellion Entertainment
I once again wanted to watch something of the cheesy variety, so I loaded up Tubi to see what I could find. There were tons of films that I knew wouldn’t even be watchable…but after some browsing something caught my eye. Snoop Dogg’s Hood of Horror seemed to be just what I was looking for, so I threw it on the TV screen and I was soon transported to a realm of cheesy humor, bad acting, low budget gore and hip-hop music. That might not sound like a fun time to some, but honestly, it was highly enjoyable and I daresay I might watch it a second time some day (or night) in the future.
Snoop Dogg’s Hood of horror is a film adaptation of a fictional comic book, and it presents itself as an anthology of three very short tales. Similar to Tales from the Crypt, it was a “secret” ninth film screened in the 8 Films to Die For film festival in 2006.
Now, this isn’t exactly something I would recommend to just anyone. There is plenty of cursing and nudity and violence, so I would only suggest this to a seasoned adult audience. And anyone looking for something with “good” acting or a perfect script shouldn’t watch this either…but to anyone with an interest in cheese horror, bad jokes, low quality splatter effects and Snoop Dogg, I’d say go for it.
Featuring many bigger names such as Danny Trejo, Diamond Dallas Page, Jason Alexander, and a slew of others, this film managed to not only be entertaining, but it far exceeded my expectations. A great watch for when indulging in “the reefer” (I don’t do that anymore but I still understand the vibes), a Halloween party, or even just a boring night home alone (or with friends), the hood of horror beckons those of us that understand a good time. Or maybe a bad time depending on perception…I guess?
Either way, watch this film (as long as you are 18 plus). I mean…who doesn’t love Snoop? –Devin J. Meaney
Posted by Dave Wolff at 9:18 AM No comments: 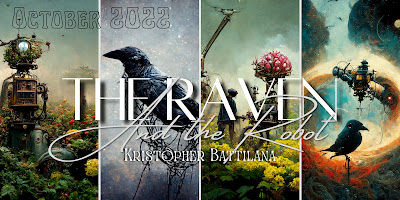 Artist: Kristopher Battilana
Location: Geraldton
Country: Western Australia
Genre: Post metal, rock, electro, goth
Full length: The Raven and the Robot
Format: Streaming
Label: Independent
Release date: October, 2022
I’m not sure who is on Kristopher Battilana’s team but this is really impressive if it is self-produced. I found the entire album very very intelligent and well-written as well as the music which accompanied it was very professional. I really don't have any particular track I enjoy more than any other, perhaps “Trinkets” or “The Mechanic”. This doesn’t speak for the truly amazing amount of art that has been contributed to this masterpiece. I really don’t want to try and speak for each track individually. These tracks weave together a tale that I don’t want to spoil for any readers. This is definitely something special and it deserves a bit more recognition in my opinion.
“The Raven and the Robot” is an extremely memorable original, I have never reviewed anything like this so I’m not sure what to say other than it kind of reminds me of bands like A Perfect Circle and perhaps I could say I can definitely see some similarities to the art as well. -Brynn Kali StarrDew
Track list:
1. Trinkets
2. The Robots Hold
3. My Feathered Friend
4. Slumber
5. Into the BlackHole
6. Twisted Metal
7. The Mechanic
8. Dayrise
Posted by Dave Wolff at 7:53 AM No comments:

Interview with Mach FoX of Zwaremachine by Dave Wolff

Posted by Dave Wolff at 5:03 AM No comments: 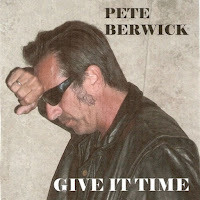 Artist: Pete Berwick
Location: Chicago, Illinois
Country: USA
Genre: Alt rock, punk, country
Full length: Give It Time
Format: Digital
Label: Shotgun Records
Release date: January 1, 2010
Years ago I was introduced to the music of Pete Berwick. Now that we are in the grasp of 2023 his tunes still grace my CD player and I can say without a doubt it hits just as hard as it did over a decade ago. As I sit writing this I am currently listening to “Give it Time”, my favourite album from Berwick’s catalogue.
With notable tracks like “Renegade”, “Is That What You’re Telling Me” and “Won’t Give It Up” Berwick slays through a barrage of overdrive laden rockers—with some of the other tracks even having a mellower edge. For rock and rollers, punks and metal-heads alike this album is a perfect example of something that is unquestionably timeless—and I daresay you should give this record a listen for yourself.
Some of Pete’s other music veers away from the overdrive and has more of a “country-ish” twang—but don’t be mistaken. With all the force of a bulldozer driven by a rum-drunk garbage pirate Pete manages to keep his “underground” vibe strong while still managing to attain more streamlined airplay.
Aside from music Pete is also a writer, an actor, and a million other things. It would take weeks of typing to fully credit Pete’s accomplishments...so I will just close by stating that Pete’s talent is unending and any publicity he gets is well deserved. To make a final conclusion...listen to “Give it Time” or any of Pete’s other albums—and hit up his website and show some support! -Devin J. Meaney
Track list:
1. Renegade
2. I Keep Waiting
3. Is That What You're Tellin' Me
4. Won't Give It Up
5. Give It Time
6. My Heart Is On Hold
7. Can I Smile Today
8. Beer
9. Falling From The Circle Of Love
10. The Sadness In Your Eyes
11. When

Posted by Dave Wolff at 1:58 AM No comments: 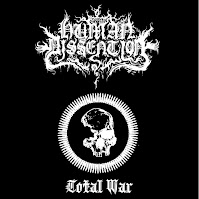 Band: Human Dissention
Location: Rochester, New York
Country: USA
Genre: Blackened death metal, grindcore
Demo: Total War
Format: Digital
Label: Independent
Release date: March 10, 2016
The intro track "Visceral Display of Warfare” to this album reminds me a lot of Cannibal Corpse style Grindcore, but with less growly vocals which are almost completely understandable. The Drums are probably the most interesting part. Honestly, it wasn’t that bad but I just wasn’t really that impressed either. It gets interesting around 2:40 though when they start their guitar melody. I would have liked to see this produced better, but that's not what music is really supposed to be about in my opinion. To sum it up I have to say it's a very good metal band, but with a little hammering out and polishing they could be better. The next track “Absolution of Earth" wasn't really much better, I honestly thought it was the same song at first but I had to check when I noticed the level of growling had slightly increased.
“Ingrained Apathy for Mankind” this track is basically the same but starts to get interesting around 2:40 (I’m starting to notice a theme here) when it starts to get quicker and more hardcore. The final track “Victory Over Life” was pretty good, typical ramping up the tempo again at around 2:40 is definitely a solid metal track which is on the same level as System of Down in terms of overall quality but I do feel as they are lacking overall production sadly. I’m just saying a music video or two would really go a long way to express this Thrash/Punk/Grindcore style of Metal music. -Brynn Kali StarDew
Lineup:
C.O.N.Q.U.E.R.: Vocals
R.A.V.A.G.E.: Vocals, guitars
Chainsaw: Bass
T.O.R.T.U.R.E: Drums
Track list:
1. Visceral Display of Warfare
2. Absolution of Earth
3. Ingrained Apathy for Mankind
4. Victory Over Life
Web links:
Human Dissention at Facebook
Human Dissention at Bandcamp
Posted by Dave Wolff at 1:32 AM No comments:

If you can't sleep
your mind is deep

you feel lost
it is a high cost

a busy mind
can be unkind

quiet the madness
to cease sadness
Was
stop rumination
there will be illumination
Posted by Dave Wolff at 3:08 PM No comments:

I need a sugar mama, someone to take care of me
let me drink in the bar, drive her Porsche car
watch her big screen TV
when my pockets don't jingle
She'll always spot me a couple of bucks
She'll never ask where I've been
but when I do come in
she can always count on my love
as long as her checks don't bounce
she doesn't have to be pretty
Beauty is nothing money can't buy
I can picture me in her Jacuzzi
living the easy life
Say I'm a fool for money
I've been a bigger fool for love
Why should I give it away
when I can make it pay
and enjoy working overtime
Not worried about nickels and dimes
I need me a sugar momma
take me under her wing
I'll kiss her hand
I'll say yes ma'am
won't curse in front of her friends
We'll vacation down in Barbados
getting suntanned on her yacht
with a beer in my hand
I'll think of my friends
and everything they ain't got
I'll be happy believe it or not
Sugar mama I'll do just what I'm told
Sugar Mama I'll be your country boy gigolo
I'll throw away my boots and jeans
Shave and wear a Tuxedo.
even learn the Tango
and teach you how to
Cotton Eye Joe.
Sugar momma take me home.
Posted by Dave Wolff at 9:00 AM No comments:

Poem: 'Remember when' by Jeremy Void

Remember when
by Jeremy Void

it already has
ended
We’re all just too dumb and stubborn
to see it for
ourselves
Posted by Dave Wolff at 9:00 AM No comments:

The world is spinning
I stare into the abyss

I watch as the colors
of a fading bliss

means of madness
Shadowed by comfort

in a world of fear
vanity & pride

My eyes burn with
delight as I stab my throat

the brown leather sofa
as I peer into

a manic dreaminess
Draped with death

I walk largely across
the bony cobblestones

the lines of normality
I play ball

with the soldiers from
forbidden throngs
Posted by Dave Wolff at 9:00 AM No comments: