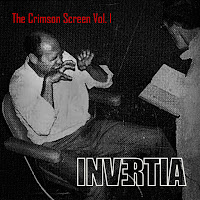 INVERTIA
The Crimson Screen Vol.1
Independent
Release Date: October 26, 2017
If Halloween-themed industrial metal were such a thing then it would certainly lie amidst the crooked veil of musical dissonance to be found in the melodies of INVERTIA. Their new EP titled 'The Crimson Screen Vol.1' is a sort of amalgamation of psychological horror, tech-death and moments of industrial breakdowns. It starts off with 'Lykanthropos' which is fairly standard and short. Luckily this track is then followed by quite possibly one of the most instantaneous and gripping songs in contemporary extreme music. The song is called 'Cast No Shadow' and it literally has everything; - heaviness, technicality, dissonance and counteractive melody. 'Face on His Face' begins with a thirty-second tape intro before bursting into a solid number comprised of inventive drum fills sprawled across the face of the track. 'Created from Cadavers' continues the horror theme and also showcases a little bit more of the group's industrial identity as you can hear some of the really organic keyboard lines showing through during the middle section. This four-track EP is cerebrally impressive and viscerally enjoyable and it oozes a sense of subtle psychological derangement throughout. -Jaime Regadas

Track list:
1. Lykanthropos
2. Cast No Shadow
3. Face On His Face
4. Created From Cadavers