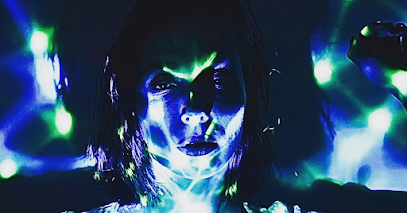 Trance Artist JAAJ Mixes Multidimensional Sonics Into a Transcendent Brew with Music for the End of the World Album, Apply for Departure
Article by Tony Sokol
Music is the universal language. Mathematics correlate across planetary divides. Multidimensional sonic explorer JAAJ blew out her album "Music for the End of the World" on 4/20/20 to bring the perfect vision to the world of sound. Building on a genre framework of EDM/Trance/Worldbeat, JAAJ expands with a dazzling array of instruments, combining ethereal harp, hard rock guitar, multi-percussionist variations, industrial synth, drums, and heavy bass. The music invites you on an intensive journey of trance where you can feel like you’re in a different world.
JAAJ is a state of being, of bliss, from an inter-dimensional planet. JAAJ is a rainbow person, otherworldly as her music. The world is going through a major realignment process. People are learning to realign with their true nature. JAAJ is putting together a cosmic collective. When the world reopens, "Music for the End of the World" will go live as an acoustic electronica project, featuring an orchestra. JAAJ is actively recruiting.
JAAJ’s influences include Santana and Shpongle. Musicians drawn to the potential music which can emerge from this are invited to join JAAJ on her travels. Musicians need money, however, and the artist is also looking for funding. JAAJ is seeking funding to produce a second studio album with orchestra studio session musicians and world singers. JAAJ is a music project based around the concept of transcending genres as well as mixing the various sounds and instrumentations of all over the world hoping to unite the people through music that appeals to everyone. She is currently working on a vocal Electronica album and has plans for a space rap album.
Jaaj on Bandcamp
Jaaj on Youtube
Jaaj on Apple Music
Jaaj on Deezer