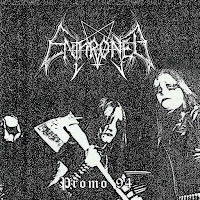 Band: Enthroned
Country: Belgium
Genre: Black metal
EP: Promo 1994 (reissue)
Format: Compact disc (Sol/Deviant), vinyl (Medieval Prophecy)
Label: Sol/Deviant Records (Germany), Medieval Prophecy Records (Belgium)
Release date: July 24, 2021
Since I haven't reviewed music for this zine in a while, I wanted to start with something released during the second wave of black metal. I was discovering Dark Throne, Mayhem, Burzum, Impaled Nazarene, Beherit and others in 1994, so I wondered if listening to Enthroned's debut promo would present me with the same adrenaline rush I received then. These were the bands who reawakened my passion for underground music and convinced me to help introduce them to this side of the Atlantic.
Likewise, it has been a long time since my ears heard “Prophecies of Pagan Fire”, “Toward the Skullthrone of Satan” and “The Apocalypse Manifesto”, which all dominated my mind in the 1990s. Upon looking at their discography, I realized I had some catching up to do with this Belgian band. This makes returning to the beginning of their career all the more fitting if I’m to rediscover them.
Rediscover them I did when the introductory track “Legend of the Coldest Breeze” greeted me with frigid winds not unlike the crisp, almost inhospitable air creeping in from outside my window, promising something dreadful and calamitous to arrive shortly. Performed on acoustic guitar by Tsebaoth, the intro comes across as tranquil and pleasant, barely disguising its villainous undertones.
From listening to “Tales from a Blackened Horde” I gathered Enthroned shared inspiration with the bands I cited earlier. Particularly the masticating thrust of old Bathory, the disorderly exuberance of Sodom and the punk inclination of Venom. On this debut Enthroned seemed less preoccupied with trying to sound as professional as possible in favor of presenting the Belgian metal underground with their sinister rancor. Professionalism would come later in the 90s but the songs on “Promo 1994” reflect a time when the first extreme bands crawled from their working class environments to create the most repugnant, unrefined music they could.
As far as their brethren of the nineties, I’d say Enthroned show similarities to Ancient around the time they recorded “Svartalvheim”; the guitar chops and atmospheric keyboards in the aforementioned song are an example of what I’m referring to. But contrasting Ancient’s clearer cut occult subject matter, the ambience here is a general homage to chaotic nocturnal evil within more penetrating cold. There are also subtle differences in the songwriting further setting Enthroned apart from their Norwegian counterparts.
From “Deny the Holy Book of Lies” onward the band dive progressively deeper into horrific images of forbidden rites, blood drinking and oaths of allegiance to Satan himself, following a throwaway rejection of white light practices as if the light never existed to begin with. Burning the crypt where this timeless evil was buried, these practitioners of darkness resurrect it under the light of the moon, to be worshipped anew and claim fresh human souls, this time to remain on earth forever.
The compact disc re-release of “Promo 1994” includes a 36 page booklet with flyers, photos, and interviews with Lord Sabathan, Tsebaoth and Nornagest, all to celebrate Enthroned’s contributions to where black metal would travel in the years to come. I should add their latest full length “Cold Black Suns” was released by Season Of Mist Records (France) in 2019 and in 2021 Back on Black Records (UK) re-released “Towards the Skullthrone of Satan” and “Rege Sathanas – A Tribute to Cernunnos)” on limited edition vinyl. –Dave Wolff
Lineup:
Lord Sabathan: Vocals, bass, lyrics
Tsebaoth: Guitars
Cernunnos (R.I.P.): Drums
Track list:
1. Legend of the Coldest Breeze (Intro)
2. Tales from a Blackened Horde
3. Deny the Holy Book of Lies
4. Rites of the Northern Fullmoon
5. Scared by Darkwinds
6. At the Sound of the Millenium Black Bells
Posted by Dave Wolff at 3:22 PM