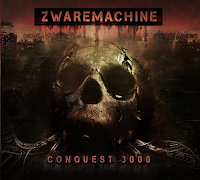 Band: Zwaremachine
Location: Minneapolis, Minnesota
Country: USA
Genre: Industrial, EBM
Full Length: Conquest 3000
Format: CD, digital
Label: Phage Tapes
Release date: July 17, 2021
Zwaremachine has made several appearances in Asphyxium since I reviewed “Be A Light” in 2018, though they’ve been active for about a decade. From the wide range of descriptions reviewers have given them, they started out writing music that can’t comfortably be grouped into categories, be it ebm, industrial, darkwave or experimental. I have no desire for clichés or hack writing, but they’re still constructing a dark castle on an isolated ocean island as they continue releasing material under the radar. I still consider “minimal hypnotic industrial body music” the most interesting description of their music. “Conquest 3000” shows Zwaremachine further in that direction, taking in everything from early 80s new wave to industrial metal like Raism, Diabolos Rising and Mysticum. Most appreciated is their ear for expanding their “future sonic weaponry” without losing their cataclysmically gloomy edge. I could immediately perceive differences between their older material and songs like “International Hero” which resonated like a funk and roll Nine Inch Nails, with driving percussion and Escape From New York-reminiscent keyboards, “Parasol” with a cyber-goth theme, distorted keyboards, Duran Duran style slap bass and Devo style synthetic science fiction kitsch, and “Ripping at the Fabric” which reminded me of a more keyboard-heavy Rammstein with low-pitched, robotically insinuating vocals. “Conquest 3000” was initially intended to be a concept album set in the distant future in which the earth is ecologically dying as a result of corporate greed and corruption and the last humans are struggling to survive with depleted resources. Four songs meant for inclusion didn’t make it, so in their place are remixes/remasters from the band’s EP “Ripping At The Fabric”. If it had continued as a concept album, I imagine part of the story could have been the last humans struck with saving earth by replacing everything organic with computerized parts, but this eventually leads to the downfall of humanity. The title track “Conquest 3000” was featured in an advance EP of sorts released last December featuring four remixes. –Dave Wolff
Lineup:
Mach Fox: Vocals, synthesizer
Dbot: Bass guitar, vocals
Dein Offizier: Drums
Track list:
1. Intentional Hero
2. Toymaker
3. What We Are
4. Parasol
5. Ripping At The Fabric
6. Zero Containment
7. New Design
8. Conquest 3000
9. Resist
10. Until Tomorrow
Review of "Be A Light (Special Edition)" by Gene Olivarri
Review of Smile That Killed A Country by Dave Wolff
Review of Remain Unseen by James K. Blaylock
Review of Be A Light by Dave Wolff
Posted by Dave Wolff at 9:32 PM