CD Review: THE NIGHTSTALKER The Chronicles of Natural City by Michelle Liberati 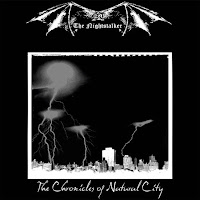 THE NIGHTSTALKER
The Chronicles of Natural City
Wolfshade
http://wolfshaderecords.bandcamp.com/album/the-chronicles-of-natural-city
http://www.facebook.com/Thenightstalkerofficial
The Nightstalker is an ambient and gothic metal band from Belgium formed in 2013. In total they have put out three separate albums but today I am reviewing their second release, The Chronicles of Natural City bought to you by Wolfshade Records.
Musically it is great to listen to because it offers a variety of acoustic passages, nicely sound piano moments, in the background it gives you a dark and atmospheric feeling that makes it sound very old school, the guitar and bass lines are very accurate and overall the production to this album is on point. The vocals on this album are very mysterious and sinister like and it creates a black metal style to this album.
If you are fans of creativity check out this album “The Chronicles of Natural City” because it offers that and instrumentally as well as vocally it is a really nice sounding gothic metal album. If you like bands such as Satanic Warmaster and My Dying Bride this album might just be for you. Be sure to check them out on Facebook and via Wolfshade Records. -Michelle Liberati