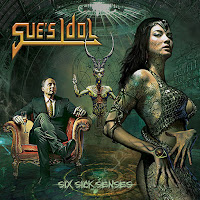 SUE’S IDOL
Six Sick Senses
Crushing Notes Entertainment
http://www.suesidol.com
http://www.crushingnotes.com
Sue’s Idol from Las Vegas is the brainchild of drummer/vocalist Shane Wacaster and guitarist Dan Dombovy whose experience in the music industry comes from extensive playing, producing and managing. Founding Sue’s Idol in 2012 they released their debut album Hypocrites And Mad Prophets two years later, followed up this year with Six Sick Senses. The band claims to be reaching new ground and reportedly have enough compositions to commence work on the next CD. Impressive that they have generated a healthy repertoire virtually on their own, fueled by a pointed work ethic. This is old school power metal of the highest order, with a timeless eighties feel and well planned additions of thrash, symphonic metal and classical. Not only is it a consummate example of studio professionalism, but Wacaster and Dombovy combine their influences in such a natural way it seems minimal effort was required. The production here is as close to perfection as I’ve heard from metal bands seasoned by far more experience, and each member (including bassist Steve Habeck, keyboardist Mitch DeMatoff and guitarist Tony Knapp) gets a chance to display their ability. Sue’s Idol’s official site includes links to DeMatoff’s and Knapp’s sites where you can get more information about them and stream their solo work. Checking out their material will give you a greater understanding of how well they work with Wacaster and Dombovy; the general atmosphere surrounding their collaborations is one of mutual respect and a shared goal. Especially on the title song, Kill Or Be Killed with its orchestral lead-in and Metal Octane which shows they can write accessible music without losing touch with their roots. In an industry in which such an accomplishment is rare, Sue’s Idol pulls it off with an instantly memorable work. You need look no further than this album to see how much thought a metal band channels into their work. Pick it up ASAP. Also check out Crushing Notes Entertainment’s home page for updates and new release information. -Dave Wolff