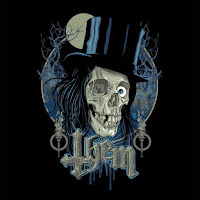 THEM
Fear Them (Tour Edition)
Empire Records
http://www.facebook.com/thembandofficial
What started as a local tribute band covering King Diamond songs is fast becoming a force to be reckoned with. I’ve never cared much for tribute bands as they simply copy other bands’ chops and stage presence instead of doing something original. It might help musicians improve their craft but to me it’s redundant. I accept having missed Black Sabbath and AC/DC in the 70s and moved past it. When I first saw Them at the short-lived new Sundance (sharing a bill with goth metallers Vasaria) it seemed too many tribute bands and not enough original bands existed on Long Island. Since then, however, they’ve been growing on me little by little. It started a few years ago when I arranged an interview with Cold Steel vocalist Troy Norr, discovering he was Them’s frontman and that Them were working on original material. When the lyric video for Forever Burns started circulating on social media, and I discovered Silent Assassins’ Mike Le Pond was Them’s bassist I was becoming hooked. With this preview of their debut Sweet Hollow I am looking forward to the release of the album. Being from Long Island I’ve studied several local legends of hauntings. Sweet Hollow is a tale of similar origin, even named after one area in particular in Suffolk County where sightings of several ghosts have been well documented on the internet press and social media. One is “Mary” who haunts a local graveyard near Sweet Hollow Road. This limited edition CD contains three songs that are to appear on the full length, revealing just enough of the narrative to spark interest until its out. The band’s current lineup consists of Norr (aka KK Fossor) and Le Pond with members of Suffocation, Lanfear and Sylencer. Together they are creating something monumental and monstrous in its musical and storytelling ability. From just one listen it’s obvious that each member of the band is channeling everything they have into the songs and meticulously putting their effort into a high-quality thrash opera that will have reviewers talking for months to come. There is a certain passion and hunger that hasn’t been heard since the NWOBHM and the emergence of thrash. The songs refuse to be denied and the band plow through the arrangements with such technical precision that when it’s over your brain cells will have been shredded beyond repair. I wouldn’t be surprised if the full length turned out to be one of the year’s finest moments. A must have for fans of conceptual metal albums. -Dave Wolff