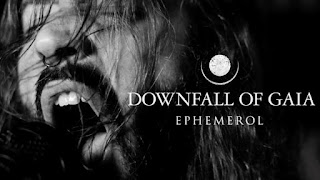 DOWNFALL OF GAIA
Ephemerol
From their 2016 full length Atrophy
Directed, shot & edited by Martin Neumann
Metal Blade
Downfall of Gaia are a German and New York based are an atmospheric, post black metal, project formed in 2008. Emphemerol is their first video release off “Atrophy”. The greyscale tones and mournful aspect of a woman writing a reluctant letter sets the emotive tones to “Ephemerol”. Contrasted with the grittiness of the city in the next frame is suitably fitting to the raw, depressive feeling. Switching back to the band footage displays their passion for their music while continual emphasis on stark natural scenery provides an excellent and haunting contrast. Emphasis placed on footage of the band allows their musical talent to be shown distinctively, while remaining consistent with the emotive, atmospheric aspects of “Ephemerol”. The depressive aspects gain a final hold in the end of the clip- with a tragic yet not unexpected conclusion combined with a sense of desperation. Stark scenery and the distinctly bleak montage combined with Downfall of Gaia’s “Ephemerol” ensure a haunting yet memorable experience. Raw, slightly apocalyptic and haunting. -Sarah McKellar