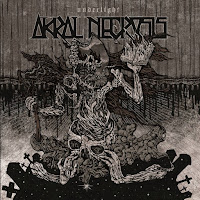 AKRAL NECROSIS
Underlight
Loud Rage Music
Underlight is the second full length from this Romanian black metal band, the follow up to 2012’s Pandemic Dominion. The Loud Rage bio for the band says this album is an expansion of their adeptness at storytelling, being a thematic concept as opposed to the narrative theme of their previous full length. From the lyrics accompanying each song stream at Bandcamp, the thematic concept is transcending human concepts of mortality and good versus evil, crossing the border between life and death to view the vastness of what lies beyond. As the speaker establishes his intellectual liberation, he announces the purpose of his travels: “Deny both god and satan/Those paths lead me astray/Make me Your chosen hound/The one who walks in grey.” In his journey into the unknown he is crossing the threshold without fear or apprehension of what we’ve been told awaits us beyond the grave. This journey seems to last for many eternities, with many strange, otherworldly lands traditional religions didn’t tell us about. Many authors and lyric writers have relayed different accounts of the other side; the major difference of Underlight is the speaker relinquishes his will, preferring to be drawn toward those alien lands by who or whatever may dwell there. Alien lands you only see in your worst nightmares. What’s more, it’s not long before this nameless traveler becomes one with the endless expanse captured in the lyrics, abandoning his consciousness and becoming something else. You’ll experience this transformation in all its horrific glory. It’s an excursion that requires your imagination. But unlike most black metal summoning images of places long dead and forgotten, Akral Necrosis shows them teeming with life that never faded with the ages. The opening guitars of Separator and the progressions to follow sound like Mayhem circa 1994-2000 (that period from De Mysteriis Dom Sathanas to Grand Declaration Of War). So the music providing backdrop for the lyrics is raw and targets your throat with a white hot razor. It sounds as fresh as black metal did in 1994 though bands like Mayhem have been emulated countless times until today. I should add other aspects of the music (example: Saturnian Gallows) may remind you of Deicide from the same period in time. Granted black and death metal weren’t considered compatible in the early 90s, this band gives an impression of how a band may have sounded if they took the chance of melding those genres despite objections from both camps. Since then extreme metal has ventured into new territories as plentiful as there are bands today, but what grabbed me about Akral Necrosis is the spontaneity they compose with. The band also exhibits some shades of Marduk in the bass guitars and some hints of what is termed melancholy in extreme metal. Listen to Purge with its account of becoming one of the undead and you’ll get the idea. I can only wonder what territory the band will explore lyrically when working on their third full length. How will they follow up on such an all-encompassing account on mortality and the afterlife? We’ll have to wait and see. -Dave Wolff
Track list:
1. Separator
2. King in Yellow
3. Saturnian Gallows
4. Exhortatio ad Bellum
5. Purge
6. Sin Gauntlet
7. Hounds of Plague
8. Blackthrone
9. Underlight