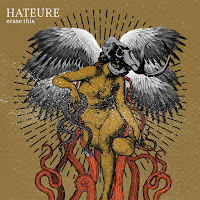 HATEURE
Erase This
Sound Carpentry Recordings
Released January 3rd, 2017
http://hateure.bandcamp.com/album/erase-this
Erase This by Hateure is a ten minute long slow burner of a track that hits all the sweet spots of what this style of Doom, Sludge and Post Metal should be. Unapologetic, expansive, sprawling, and looming riffs soaked in filth, feedback, and distortion. It is hypnotic and pulls you into its abyss. It builds until it hits its threshold and doesn't let go once it has you in its grip. There is a dissonance here, and consistency that remains constant even as it twists and turns, and shifts within itself. It's brash and commanding, and pulls no punches as it slowly soaks into your consciousness. The silence when it's all over, and when the dust settles leaves you wanting more. The contrast between the sound of silence afterwards, and the listening experience only serves to remind you how infectious and foreboding the music is. Dark and ominous, harsh, and brutal. The song captures the rawness and vile side of human nature, and pummels you under its weight while it slowly but surely drags you under and into a place where there is no light at the end of the tunnel. For the band to capture this sort of emotion and present it in such an honest way is impressive. Ten minutes of sound that has that ability to drown out the world while you soak in the experience. It's not conventional. It's not pleasant. It's not pretty. And it's not typical. But that is exactly what makes it so good. It's powerful, heavy, dark, demanding, and it speaks through its sounds as it unravels and engulfs you. It sounds almost as if it was fighting to get out, and luckily for us, Hateure was able to harness that, channel it, and unleash it from the depths of their own consciousness. I will certainly be keeping my eyes and ears fixed on what Hateure is up to next as I'm eager to see where they will go from here and where they will take things going forward. There is something about what they're doing that is incredibly satisfying, but it always leaves you wanting more. -Alan Lisanti
Posted by Dave Wolff at 9:21 AM