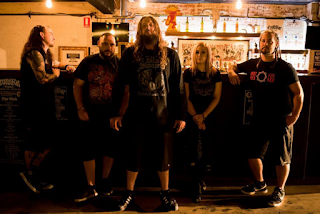 IN DEATH
Godzilla
From their forthcoming full length The Devil Speaks
No Clean Singing’s site where I watched In Death’s promotional video promises you will be bludgeoned by their advance track Godzilla. Godzilla was recorded for their new recording The Devil Speaks which comes out next month. The Australian death-thrash metal band composed the song with a great deal of crunch and stattaco guitar chops; if this is what it takes to bludgeon you, you can rest assured the song will do so without much effort. One of my first impressions was it sounds a little like Vader, with less blast and more groove. The next impression I received was from the vocals which reminded me of Per Gyllenbäck of Deranged on Rated-X. Vocalist Krugga boasts a similar approach to death metal vocals, seeming to channel long-winded guttural roars from deep in the pit of his stomach. There is a refrain midsong that brought Amon Amarth to mind, and later in the song there is a short section of atmospheric lead guitars. I found no lyrics so I can’t say what the song is about, but the above link has information about who filmed and edited the video. Wilson Bambrick’s (currently producing a documentary of a Japanese band touring Australia) direction called for the band to be surrounded by minimal lighting, with intermittent closeups of each band member accented by strobe effects from one shot to the next. The lighting, usually intended to spotlight the band, is relegated to the background here, providing a cold, vast atmosphere. I have to congratulate the band for maintaining their performance through what seemed like many takes with close to no lighting and strobes going off right in front of them. You can visit In Death on Facebook for information about the album and planned promotional shows. -Dave Wolff