CD Review: FROM THE VASTLAND Chamrosh 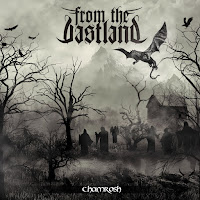 FROM THE VASTLAND
Chamrosh
Immortal Frost Productions
From The Vastland began in Tehran, Iran in 2010, the brainchild of guitarist/vocalist Sina who relocated to Trondheim, Norway after appearing at the 2013 Inferno Metal Fest. Sina’s project came into existence after the breakup of the Iranian black metal band Sorg Innkallelse who released ten full lengths while active. I remember from documentaries that Iran is not the safest place to start a band in (Sam Dunn’s Global Metal explores this in detail), so it’s always gutsy to play metal in an Islamic country. Chamrosh is the first CD released by Immortal Frost Productions after three full lengths (2011’s Darkness Vs. Light, The Perpetual Battle, 2013’s Kamarikan 2014’s Temple Of Daevas) and an EP (2015’s Blackhearts). Those were handled by Russia’s Satanath Records, the Netherlands’ Non Serviam Records and Norway’s Indie Recordings. According to Facebook the musicians Sina currently works with are Tjalve of Den Saakaldte, Pantheon I, Horizon Ablaze and 1349 on bass and Spektre of Horizon Ablaze and Harm on drums, together with Destructhor (Myrkskog, ex-Morbid Angel) on guitars and Vyl (Keep of Kalessin, Gorgoroth) on drums. Tjalve and Spektre appear as the bassist and drummer here. Immortal Frost released Chamrosh in September 2016 on a limited run of 1000 copies, while the label’s Bandcamp profile is streaming it in full. Sina’s subject matter is based on Zoroastrianism and the mythological legends of Persia and Mesopotamia, offering something new to the themes black metal is known for. I know little about said legends, and there are no lyrics posted at Bandcamp, so for a full understanding of the concept I have to start from the beginning. But taking the lyrics in this direction what should keep them from being lumped in with the clone BM bands trying too hard to be “kvlt.” Not for the fainthearted or the easily disquieted, Chamrosh embrace the grotesque fascination of Mayhem and Satyricon, adding a primal drum sound, shredding vocals, a touch of atmosphere and bleak acoustic sections kindred to DSBM (depressive suicidal black metal). Wizarsh, The Malkusan Witch, Chamrosh and Saurva, Demon Of Hunger are among the best examples of how closely these elements work together. The production is relatively clean and balances the atmosphere with the abrasive vocals, but in some areas it could have been polished a little, such as the drums which also could have used some echo without diminishing their primal urgency. Still the musicianship is relentless and shows the maturity potential of this solo-project-turned-band. This can be a groundbreaking act if they keep at it.
-Dave Wolff