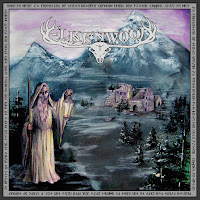 ELKENWOOD
Elkenwood
Independent
Since Liam Anthony parted company with the Australian thrash band Malakyte he has taken on several projects, like publishing the Dampman and Shadowsix comic series and becoming the drummer of this folk metal band that formed in 2014 and released the debut single Uncreation a year later. This song is the introductory of their debut full length, and is accompanied by three more epic compositions of black/folk metal. Interviewing him in 2016 I uncovered a fair helping of background information on these projects and his other band Dragonsmead, a power metal act that presents tales of swords and sorcery inspired by Manowar and Rhapsody Of Fire. Drummer Anthony, vocalist/guitarist/pianist Gareth Graham and violinist Amanda Terry, are also involved in Dragonsmead so they spend a lot of time working, practicing and performing. You’d assume this would be a help to the material recorded for this album, and their extensive experience together shows. From the six minute to ten minute songs, it runs smoothly and doesn’t sound too tedious or time consuming. The first track I cited (with guest appearances by Dalton Quade Wilson on acoustic guitar and Sid Falck on drums) features a long, theatrical lead-in establishing their penchant for writing songs that resemble heroic narratives by their nature. You can tell a considerable amount of thought and preparation went into these canticles and the musicians involved have a way of drawing you into the atmosphere laden sweeping majesty they create for this track and those that follow. Old Satyricon meets Like Gods Of The Sun era My Dying Bride would be a fitting analogy. The songwriting and its execution invite you in to explore as long as you wish, and once you’re there you may find you want to visit many times. I have to note how uplifting the band’s interpretations of black and folk metal are, even in their most somber moments. This is mostly because of the interplay between the piano and violin, and the guitars of Nic Williams who contributes most of the atmosphere (not to mention the choral vocals occasionally appearing in the background. This aspect creates a refreshing balance for the harsher elements of the musicianship. The themes of fantasy and vast emptiness are arranged to show beauty in darkness in a way that is completely unique to them. The darkness is illuminated from within its deepest depths, where you would usually expect something far more malevolent to be lurking. Lana Ritchie’s cover artwork touches on all this but to fully experience it you really should check out the songs. More than this each member of the band is presented with an opportunity to shine with equal sharpness and clarity, whether they’re backed by the other musicians or given a moment or two to play solo. Gareth Graham and Cazmeth Moon collaborated on recording, mixing and mastering and knew what they were doing when it came to bringing the band’s most promising qualities to light. Head to Elkenwood’s Bandcamp page and give this album a listen. -Dave Wolff