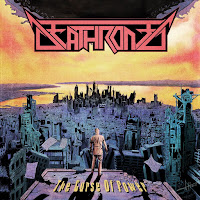 DEATHRONED
The Curse Of Power
Independent
Paris; widely regarded as the quintessential city of all that is fine, splendid and regal due to its beloved association with romance, high art, fashion, glamour and.. thrash metal? Oh, goodness, most certainly not, or at least not as far as we traditionally know. Nonetheless DEATHRONED, the Paris-formed power trio consists of Arno Mazzari on vocals / guitars, Julien Caudmont on bass / backing vocals and David Caudmont on drums. Formed in 2012, the group have released two recordings thus far; a demo titled 'Fallen in Vain' and an EP titled 'The Curse of Power', the latter of which I will be focusing on due to the fact that above all else it's quite an underrated release. An EP, yes, but it's incredibly strong for what it does. The cover art sets the atmosphere with its semi-futuristic urbanized dystopian landscape, not totally dissimilar to NUCLEAR ASSAULT's 'Game Over' as far as imagery goes. However, on to the real question; - is the music as daunting and shambolic as the album cover represents? Maybe not, but it most certainly isn't akin to taking a cruise upon the River Seine. At a compromise it's a mixture between the two; the controlled nature of the structures and the superficial frantic mania that emanates from it. They're a very well put together sort of group and I'm really fond of how they piece their tracks. Musically they're a hybrid between KREATOR, EXODUS, DEATH ANGEL, SODOM and perhaps early METALLICA. Very thrash-oriented but in a European sense. You can hear that they don't originate from the nation of which the genre was formed as it quietly seeps through the design and architecture of the riffs. I think in many ways they're one of the best modern groups as there's something very likeable about them. Arno Mazzari, or, simply "Arno" has a unique style of singing which almost has a whistling quality when he reaches the high notes. The riffs are typically quite choppy and they rely a lot upon staccato which in turn influences the nature of the song as the vocal melodies are pieced around such ideas. 'Cut You Down', for instance, is a track that I can imagine being their signature song as they're a group that have very anthemic choruses due to their high level of rhythmic immediacy. Obviously with it being an EP it's not an ample taste as to how the group will handle a full-length in the future but it certainly provides listeners with a sense of optimism. -Jaime Regadas