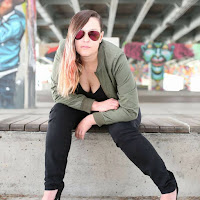 X-PLYCIT
Place of origin: Cape Breton Island, Canada
Genre: Rap, hip hop
Over the last few years, I have really been getting involved with a bunch more rap music than I have in the past. In my younger years, I would mostly listen to extreme forms of metal, punk rock and various different styles of grind and gore. I would like to think my acceptance of different styles of music has really grown over time, and because of that I have been noticing a myriad of talented artists from my local area that I would not have paid much attention to before. One of these artists is the local rapper X-Plycit. Tonight I have spent some time listening to different songs from X-plycit. The songs that I have been listening to range from 2015 to 2018. Not to say that she had no talent when she started, but she clearly has improved within only a few short years. The production quality of her recent tracks are highly professional and her timing and flow is on point. Her attitude appears to be totally in your face, but she acts so without coming off as cocky or ignorant. Besides, if you are talented and you know it, shouldn't you show it? like a bong rip after a bad day at work, X-Plycit puts me in a positive mood and I suggest anyone interested in this genre of music sincerely checks her music out. This is not the rapper you knew from high school who rapped for quarters and the rest of your Pepsi; this is some really talented shit. Just fucking listen to it, she makes Cape Breton look good. -Devin Joseph Meaney