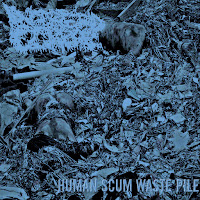 Project: INTREPID CORPSE
Location: Pape'Ete
Country: French Polynesia
Genre: Mincecore/grindcore
EP: Human Scum Waste Pile
Label: Independent
Format: Digital
Release date: October 21, 2019
As I was writing some fiction and various true stories tonight, I came to the realization that it has been a while since I wrote a music review. After finishing up the editing that I had planned, I decided that it was time to remedy this.
As always, my first thought was to hit up Youtube and check out the newer grindcore and goregrind releases that have been posted. During my usual search, I came upon “Human Scum Waste Pile” by Intrepid Corpse. I clicked play on this short EP, and I was immediately transported to a realm of ping-snares and caveman riffs. Goddamn... I fucking love grind!
First off, I need to mention that I was instantly reminded of Autophagia and (older) Captain Cleanoff. This project has its own style, but there is without question similarities between Intrepid Corpse and these well-known grind projects. I let this release play through a handful of times to get a feel for the music, and I did so without complaint. This stuff is damn good!
Down-tuned guitars, vicious drumming, and violent, spastic vocals assaulted my ears as I listened. Grindcore touches my soul in a way that few other genres can, and Intrepid Corpse is no exception.
Intrepid Corpse is a one-man project from Pape'Ete, French Polynesia formed in 2019. This is his third release, so I am now inclined to check out his previous offerings. As I am writing this, I decided to let the EP play through one more time just for shits and giggles. Amazing, brutal, and raw. Epic mince, homie! -Devin Joseph Meaney