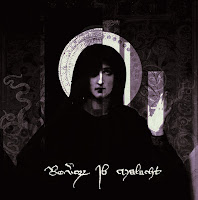 Band: REVERORUM IB MALACHT
Location: Uppsala
Country: Sweden
Genre: Experimental black metal/dark ambient
Full Length: Im Ra Distare Summum Soveris Seris Vas Innoble
Label: Annapuma Productions
Format: Vinyl, CD, digital
Release date: May 11, 2018 (World), June 15, 2018 (USA)
This is some bizarre shit.... this would fit into the black metal niche but to me fits a more experimental / dark / doomy vibe. This is not going to be for everyone. Some will like it, many will not. The rather grim production values displayed on this recording serves to keep the whole thing underground, the guitars are barely audible in some of the tracks, more a buzz and texture in many places, but when you can hear them it’s obvious these guys are good and the guitar player shows off some extreme shred skills in the vein of Sadistik Exekution or Blasphemy. I'm not sure how to feel about this, as it would be good to hear more of the guitars, but the production does give the band an identity and sound of its own.
The songs are lengthy and uncompromising, the drums are relentless (not sure if a human or machine) but they are punishing, the vocals fit squarely into black metal territory utilizing some gut-wrenching screams, chants and growls and throat singing. The songs tend to be underpinned by keyboard / organ sounds and some creepy gongs and other percussive instruments. The whole concoction fits together rather well in my opinion (despite the lo-fi production) In between the songs there's some kind of ritual church type sounds which give the whole affair some rather sinister overtones. This is EVIL nightmarish stuff. Soundscapes that musically really seem to re-create hell. Here-in lies the problem the band describe themselves as ”Roman Catholic Black Metal” and while I don't have a copy of the lyrics (all the titles would appear to be in Latin anyway) it’s hard to picture something as sinister sounding as this band producing anything that has any roots in Christianity.
I know a lot of metal elitists will dismiss this upon hearing they have Catholic undertones to the music but if you give them a chance this is some of the most hateful and evil-sounding music to be spewed from the underbelly of the black metal genre. And hey, at least the band are doing something original both sound wise and theistically, they deserve major kudos for that. -Reggae

This review is also uploaded at Reggae's blog Metal Mixtape. -DW
Posted by Dave Wolff at 9:48 AM