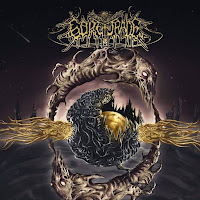 Band: Goretrade
Country: Colombia
Genre: Brutal death metal
Full length: Regressive Entities
Format: CD, limited edition digipack, vinyl album
Label: Green Revolution Prods
Release date: July 1, 2019
I've always had a special feeling for GORETRADE, I've been tracking them since their early days of incubation when they were practically a duet integrated by César V. in the string ax and by Grindersson M. over the anti-aircraft batteries. You're not asking me, but I felt like I always knew them. I attended the same high school, I was a neighbor of Andersson (real name of the first drummer), back then, we used to exchange cassettes, I bootleg from him some copies for albums like "Patrons of The Dark" of PARALYSIS or KILLING ADDICTION's Omega Factor. Worthy candidates to keep within my fav albums to spin on a regular basis. The same happened with that record released about seventeen years ago. An unquestionable classic of the Brutal Death Metal underground called Ritual of Flesh (2003), the first full length of GORETRADE; Amazing album, which I play very often because it's so unique in many ways. By the way, I do not know if anybody else has already thought it, but ROF it is clearly a product derived from the lack of opportunities in a country like Colombia. Still, so indifferently mean to the metallic scene and with many other things related to the Rock culture. I say this because GORETRADE (Grindersson and César) dreamed of taking things to another level and emigrating to the north, it was seen as the best way to achieve it. For that reason, they followed in the footsteps of their mentors, the band INTERNAL SUFFERING, who at that time had been devastating the big apple and surrounding areas with their subhuman and occult-Lovecraftian Brutal Death Metal.
GORETRADE once installed and re-grouped in New York, starts to record and edit all the stuff for their seminal debut during September and October. ROF finally hit the streets in late November 2003, under From Beyond Prod's wing (sublabel of the Dutch Displeased Recs). The iconic photo of the band in the New York Metro, printed on the back cover of the CD, announced that the Colombians were destined to provoke a gore tsunami all over the world capital of Slam. And they did it, in their own way. They left a solid and pestilent monolith that is still standing in front of other classic albums of that style like Foretold... Foreseen (1998) by PROPHECY, Prophecies Foretold (1998) by DEHUMANIZED or Molesting The Decapitated (1999) by DEVOURMENT, which is perhaps the most notable aural influence on ROF; who shut down with two re-recorded songs extracted from previous splits with CORPSE FUCKING ART and CARNAL (a band from Armenia/Colombia that subsequently pursued the American dream) where this prodigious and polyrhythmic anthem called "Laceration", a track that deserves a separate chapter, and I do not exaggerate, check those frantic rhythm changes, with syncopes that threaten to smash your spinal cord. Look for those blasting beats a la Grindersson, crushed and grouped into triplets that would make Flo Mounier blush, what a way to finish an album, it's like being shot with a 44 magnum that flashes out of one of the speakers, just to blow you brain on a coup de grace.
In fact, bringing back ROF, serves us as a start to dimension the huge evolution that GORETRADE has had in its two decades of gore traffic. The comparisons, hateful and everything must be made because nowadays, Goretrade's ferocity, rawness, and brutality, exposed in their first releases, lies 6 feet underground. However, over time, some of that same feeling prevails coupled with something called maturity which emerges exclusively from the endurance of being there, giving it all despite the adversities of life, as did Cesar, the only original member present in all different incarnations of the band. I figure losing Grindersson, was hard, but the show never stops because of the soldiers, especially when there are still necks to slaughter and manes to pluck. Cesar has not only been GORETRADE's lead vocalist, guitarist, main composer; he has also served as manager and more recently as producer and boss of the knobs in his own studio Density Soundlab, where he recorded, edited and mixed the entire Regressive Entities album by himself. An album not as crushing or slam as ROF, but still within the brutal territories, only with a more refined approach to sound, more melodic in compositions and more technical in execution.
There is so much to grab since there are fourteen cuts (perhaps a little long) to exhume in about 46 minutes with 33 secs, suitable time to get deaf due to the intensity of the shrapnel. Check out cuts like "Surrounded by Demons" (of which there is a video) or the insane Breakdowns and slam rhythms in cuts like "The Sounds of Mourning", "Archons Domains" and "Falling Down Again". The melodic and unusual solos in “There’s no Heaven” kickass and the mega speed and performance in the last four songs of the album, where drummer Mauro M. reaches the rhythm of a mini-uzi and the intensity of a pneumatic hammer. Another highlight in "Regressive Entities", is the production by Green Revolution Prods (who have been supporting the Colombian metal scene strongly, releasing new or veteran bands and also re-channeling nostalgic records of the Colombians metal discography, through fairly careful editions by the way) on luxury digipack CD, adorned by Carlos Jácome, a cover artist who has been very active in recent times. You know what? I do not want you to continue reading this, better go once and for all for your copy and witness the sound history that synthesizes 20 years of artistic and musical maturity. I strongly recommended this record for fans of DECAPITATED, BEHEMOTH, ORIGIN or DYING FETUS, and of course to all the metal junkies who rejoice about the Southern American cult. –Jorge A. Trejos

Track list:
1. The Origin
2. Surrounded by Demons
3. The Sounds of Mourning
4. While You Pray
5. The Archon's Domain
6. Irreverent Salvation
7. There's No Heaven
8. Only the Blood
9. Falling Down Again
10. Synchronized with Fear
11. Kill Withour Blink
12. Serenity Is Not Included
13. Something Haunt Us
14. The Awareness of Predator