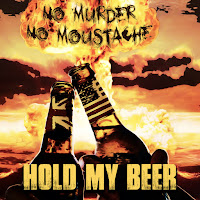 Band: No Murder No Moustache
Location: Wales
Country: United Kingdom
Genre: Celtic acoustic punk
EP: Hold My Beer
Format: Digital album
Label: Smash Mouse Records
Release date: June 26, 2020
During my normal escapades on the internet, I happened to come upon some new tunes. The upcoming EP ''Hold My Beer'' by No Murder No Moustache. This release boasts of a delightful combination of punk-rock and ''a Celtic folk twist,'' as stated in the email sent to me by Beth Jones.
I normally review heavier music, but I have no qualms about broadening my horizons... so I humbly clicked play on the tracks when they were officially downloaded to my computer. The five tracks I listened to from this were Hold My Beer, Fragile Society, Lose Myself To The Dark, Only Lies So Far, and Cyn Mae'r Byd Yn Cael Ei Ddinistro. The first thing I will say is that this style of music does not frequent my CD player or my Youtube/Bandcamp streams, but honestly, the songs are catchy, played well, and recorded and produced with great efficiency.
The highlight of this for me would be the acoustics and the Celtic aspect. They are both aggressive and punk-rock driven, but for me personally, they also inspire a sense of adventure and a longing for epic quests. That may be a bit off the mark, but I dare say that these tracks would pair well with a pitcher of mead or maybe some cheap draught... (But hey, that is just me).
This EP will be officially released June 26, 2020, and is the work of Owen Crawford. Yes, you heard that right. This is one individual! With the additional vocal help from Chris Hudson-Silver, Chris Hopkins, Hannah Crawford, and Ceri Richards, Owen manages to craft an elegant form of music that is both pleasurable and invigorating to the ears and other senses. This is a great EP, and I encourage anyone to give it a listen when it drops. Keep it up! –Devin Joseph Meaney