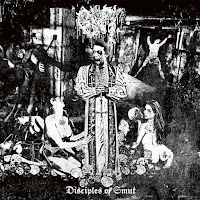 Band: Gut
Country: Germany
Genre: Pornogrind
Full Length: Disciples of Smut
Label: Splatter Zombie Records
Format: Double Gatefold LP, CD, cassette, digital
Release date: May 14, 2020
The ''Disciples of Smut'' album by GUT. Released 2020 through Splatter Zombie Records. I normally don't frequent much pornogrind, but I have a bit of a history with GUT. I enjoy some of their earlier releases, and I am even a fan of their notorious Cumback album that was given a lot of both praise and hatred in the underground. By the time GUT made it to that album, I figured their sound would be forever tongue-in-cheek. But goddamn... this new release is super intense. They have changed their sound once again. They are more serious. More putrid. More vile.
Clocking in at over 40 minutes this is no simple album. This is a full-length adventure into the realms of the perverse and the misunderstood. The chaotic and the disturbed yet beautiful. I would encourage most people to give these tracks a spin but I really think that this is more suited for those who frequent iniquity and the extreme. This is not for the squeamish or the faint of heart.
I have always been a fan of GUT, even after I pretty much rejected the blatant misogyny of pornogrind. But even after that, this is one of the few bands of this ''brand'' that still come off as unique, interesting, and worth a listen.
If you weren't disturbed before your first listen, prepare for some cold sweat and goose flesh. This is for the dark ones. Don't take this one lightly! –Devin Joseph Meaney