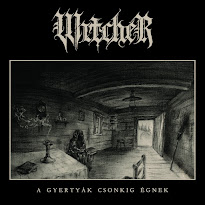 Band: WitcheR
Location: Szombathely, Vas
Country: Hungary
Genre: Atmospheric black metal
Full Length: A gyertyák csonkig égnek
Format: Digital album, compact disc with 4 page booklet, limited edition cassette, limited edition 12" vinyl with insert
Label: Filosofem Records
Release date: November 1, 2019
The two musicians comprising WitcheR, Roland Neubauer and Karolina Gere (also of Vrag and Trollheimen, respectively) have been exclusively working together toward a musical vision that’s as immense, majestic and monumental as the laborious effort they directed into their second full length. Having worked together for ten years without hiring additional musicians, they’ve given themselves enough room to progress with the resources they had to start with, placing the most emphasis on their adoration for the beauty to be encountered in gothic music and black metal, and their desire to reach the limits of their invention and beyond. With “A gyertyák csonkig égnek” this Hungarian black metal band show how far they’re reaching, presenting a statement that black metal can be menacing and artfully beautiful, showing you all the tranquility that exists in the darkest forests and snow drenched plains of their country or any other in the world. There is a harmonious relationship between rawness and atmosphere on this album that fosters a symmetry between fulfillment and longing, desire and regret, joy and pain, life and death. It reflects the constitution of nature in such a way that it gives the white-and-black of light and darkness a multitude of shades as distinguishable as the multitude of colors progressive rock bands write into their material. Neubauer’s guitars and Gere’s keyboards play off each other in a way that’s indescribably profound. Neubauer uses what sounds like sixteenth notes as a solid basis while Gere takes liberties to create dreamlike layers with a variety of keyboard sounds that compel you to feel each track deeply. The only drawback is that the percussion sounds mixed a little too low when it could have pushed Neubauer and Gere’s interaction a little more fervently, providing it with even more texture. But these two compose songs that are darkly ambient and gloomy without being overly depressive but rather eerie and beautiful at the same time. This and their past releases are highly recommended to those uplifted by eminently tenebrous music. And don't overlook their cover of Tchaikovsky at the end. –Dave Wolff
Lineup:
Roland Neubauer: Vocals, guitars, drum programming
Karola Gere: Keyboards
Track list:
1. A gyertyák csonkig égnek
2. Feloldozás
3. Az én csendemben
4. Az utolsó utamon
5. A hattyúk tava (Pyotr Ilyich Tchaikovsky cover)
Posted by Dave Wolff at 8:27 PM