Split full length review: Splatterhouse/Birdflesh "Taste of the Sun/In the Swamps You Rot" (The Spew Records) by Devin Joseph Meaney 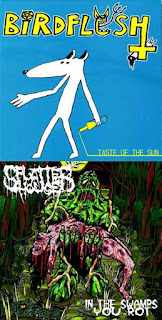 Band: Splatterhouse
Location: Portland, Oregon
Country: USA
Genre: Death metal/grindcore
Band: Birdflesh
Location: Växjö, Kronoberg
Country: Sweden
Genre: Grindcore
Split full length: Taste of the Sun/In the Swamps You Rot
Format: 7” vinyl, streaming
Label: The Spew Records
Release date: September 30, 2006
I normally try to keep my reviews up to date and current, but honestly when I sat down to review something I could find nothing recent of interest. SO... obviously the thing to do was delve into the annals of grind history. After some searching I came upon the 2006 split between Splatterhouse and Birdflesh. I know I at least love Birdflesh... so why not give it a go?
Splatterhouse ''In The Swamps You Rot'' is a nice little blast of lo-fi death-ish grinding with superb vocals and tight musicianship. The recordings are a bit rough... but without question highly enjoyable. Think of ''Ghoul'' when you think of this band. Same vibes!
Birdflesh ''Taste Of The Sun'' is your classic Birdflesh. Powerful and in your face in a relentless way. Birdflesh was the reason I clicked on this split, which makes sense, as Birdflesh is absolutely killer... but I now would have no problem listening to some Splatterhouse either!
This is a really short split, so instead of rambling further I will just yell at you to listen to it... DO IT! YOU KNOW YOU FUCKING WANT TO!
And yeah... I need to start digging deep from time to time. It seems that sometimes you find gems! ...Like this one! –Devin Joseph Meaney
Lineup:
Splatterhouse:
Jason V.: Guitars, vocals, bass
Down Tymdrome: Vocals
The Executionist: Drums
Birdflesh:
Barbro Havohej: Bass, vocals
Achmed Abdulex: Guitars, vocals
Smattro Ansjovis: Drums, vocals
Track list:
1. Splatterhouse: In the Swamps You Rot
2. Splatterhouse: Beast Of The Bayou
3. Birdflesh: Evil Coffin
4. Birdflesh: Pretty Dork
5. Birdflesh: Happy Hour, Crazy Hour
6. Birdflesh: Taste Of The Sun
7. Birdflesh: Keeper Of The Seventh Son
Posted by Dave Wolff at 9:07 PM