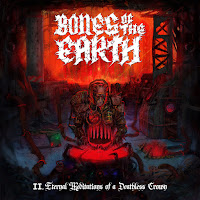 Band: Bones Of The Earth
Location: Fayetteville, Arkansas
Country: USA
Genre: Doom/sludge/stoner metal
Full Length: II. Eternal Meditations of a Deathless Crown
Format: CD, tape dad cassette
Label: Independent
Release date: April 2, 2021
What’s going on everyone!
It’s *METAL TIME* again! And I think it’s time to take it back to a genre I haven’t covered much on here so without any more wasting time, Bones Of The Earth “II. Eternal Meditations of a Deathless Crown”.
So this is the latest album by Bones Of The Earth who is a new band I’ve discovered and I’m all the better for it!
Because among these six tracks you have quite the interesting blend of Sludge Metal/Groove Metal.
So, what they have going on is an album with incredible pacing combining the slow moving elements of Sludge with the also commonly slow elements of Groove to find that little sweet spot in the middle.
Most songs feature these heavy-handed but melodic guitar progressions and methodical drum patterns to sync, some songs would just feature mainly instrumental before any words kick in which gives more of a ‘Progressive’ metal feel I suppose but the sound and production incorporated give it that strong sludge, an apocalyptic vibe that bands such as ‘Eyehategod’, ‘Acidbath’ and early ‘Swans’ are used to its awesome!
Another element of the music is the vocals! With the main singer sounding like his own combination of Phil Anselmo and Henry Rollins. You have that strong in-your-face attitude that both attribute to but also that heavy punk flair that Rollins brings combined with the relentlessness that Phil possessed so all in all a fascinating mixture to have on the record but it works! The more I listen to this project, the more it hits me how well it’s constructed based on all the elements coming together as one!
For a band I just recently discovered, they are really good! They do a great job bringing back to life a prominently lost genre and upgrading it to fit the modern era with heavier instrumentation, devastating vocal performances, and more!
If you’re looking for a consistent, good time then these guys are for you! The link will be below and make sure you go support them!
https://bonesoftheearth.bandcamp.com/. –Corban Skipwith
Lineup:
Raif Box: Bass, vocals
Erik Ebsen: Guitar
Cody Martin: Drums, vocals
Track list:
1. Decline
2. Machine Rising
3. Peaceseeker
4. Inoperable
5. The Empire Never Ended
6. Reclamation
Relentless Reviews With Corbz
Posted by Dave Wolff at 3:19 PM