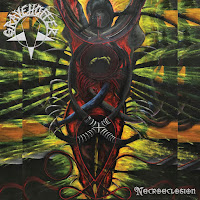 Band: Gravehuffer
Location: Joplin, Missouri
Country: USA
Genre: Metal, punk, crust, grind, sludge/doom
Full Length: NecroEclosion
Format: Digital (includes live stream), compact disc, vinyl (different colors)
Label: Black Doomba Records
Release date: January 15, 2021
What’s going on, I’m back and this time with a special album review! Because we are here today to discuss one of the most unique metal album blends I’ve heard in quite some time! NecroEclosion by Gravehuffer.
So, where to begin with this, there’s just so many key elements to discuss so what better way to start then one at a time.
Let’s first talk production, what I felt after listening to the album in its entirety is the bands split focus between the two half’s.
First half is the band’s attempt at ‘Larger Than Life Novelty’ tracks and the other half being the ‘Raw and Brutal’ saga to close the project off.
On the first 4-5 tracks you have luscious chord progressions, interesting use of voice/sound sampling, creative and outside the box thinking and utilization.
While on the final tracks you have such relentless instrumentation, fast paced solos and drum patterns, noise based rhythms and playing and overall presenting the sense of dread and insanity.
The other thing I wanted to discuss was the themes and lyrics because for me (at least regarding the first half) that’s what carried the albums personality and character!
For example the first track ‘Custom Of The Sea’ is a kind of prayer and tribute to the Greek God Poseidon which I absolutely loved as I am a sucker for Greek mythology!
The second track ‘HellHound’ is very self-explanatory with the songs theme being ‘HellHounds’ which is pretty badass considering the mixture of sludge/death metal fusions.
The third track ‘Sights To The Sky’ is an interesting track about ‘Buzz Aldrin’ and his ‘Apollo 11’ mission, it uses the voice samples introducing him and even the countdown to blast off, it’s such a creative use for a metal song that I couldn’t help but love it!
And then for what has to be the most fun and Bizarre use of creativity ‘Death Before Disco’ it seems they use a sample from ‘Saturday Night Fever’ and for the first 30 or more seconds it actually plays a disco song (which was wild) but then a sudden metal breakdown forms and we here in a death growl.
EVERYBODY GET ON THE FUCKING DANCE FLOOR!
Like WHAT?! What Metal album have you heard that has done ANYTHING like this? It’s absolutely insane yet simultaneously genius! I was smiling the whole way through!
Look, I would say just for the ‘novelty’ alone I would say check this album out, it’s gone tons of personality, character and Alpa attitude to blow your socks off!
Its tongue and cheek yet creative as hell! It allows you to experience the beauty of both worlds of
-Story Tracks
-Mindless Metal Mayhem!
It’s got everything you could have possibly asked for and definitely a lot more! Go and support these guys for their amazing effort! -Corban Skipwith
Lineup:
Travis McKenzie: Vocals
Ritchie Randall: Guitars, vocals
Mike Jilge: Bass
Jay Willis: Drums, vocals
Stan Boman: Guest vocals
Guitar solo on “Sights to the Sky” by Dan 'Chewy' Mongrain (Voivod)
Guitar solo on “Smaller Than Death” by Curran Murphy (Annihilator, Nevermore)
Guitar solo on “Stingray” by Craig Hecht
Horns arranged and performed by Doug Dicharry
Track list:
1. Custom Of The Sea
2. Hellhound
3. Sights To The Sky
4. Death Before Disco
5. Stingray
6. Smaller Than Death
7. Ghost Dance
8. Quarantine War Machine
9. Revenge Of The Dumpster Baby
10. Causes
11. Backpack
12. Mad Wolf
Relentless Reviews With Corbz
Posted by Dave Wolff at 1:13 PM