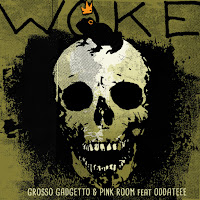 Artist: Grosso Gadgetto and Pink Room featuring Oddateee
Location: Lyon
Country: France
Genre: Ambient/drone hip hop
EP: Woke
Format: Digital album, cassette
Label: Solium Records (cassette)
Release date: January 28, 2021
What’s going on everyone!! Sorry to keep you all waiting but the time comes again for another review and this time an EP review of a group of artists I’ve never heard before collaborating on a single project to create this unique sonic Paradigm Shift if you will.
Allow me to introduce “Woke” by Grosso Gadgetto, Pink Room, and Oddateee.
So, what is presented to us is a 4 track (plus one bonus track) EP that definitely takes one of the more interesting approaches to music I’ve heard in a while with what I can only describe as ‘Minimalistic Drone Rap’.
When you first start the album you’re greeted with this haunting instrumental with grand keys and chords reminiscent of stuff you’d hear in horror movies.
I love how off the bat this album is presented as a metal album with terrifying key instrumentations coming off so strong and intense that it sets the mood of the album perfectly.
From the second track onwards we finally start to see the ‘Minimal Drone Rap’ style kicking it with who I believe to be ‘Oddatee’ coming through with these raw and in your face UK bars similar to the likes of ‘Acarine’ and his soundtrack work for the Green Street Hooligans movie with tracks like ‘Stand Your Ground’.
Although the Hip Hop element was surprising for sure it doesn’t take long for it to fit comfortably within the twisted realm that is this record, his gritty bars and vocal work fit nicely with the dark vibes presented.
I feel like this is one of the more simplistic rap efforts with the chorus’s being nothing more than the same sentence repeated over slowly with the rapper building more aggression with every repeat, kind of similar to how a group like 'Rage Against The Machine’ did it on their debut album.
I don’t want to give away too much about this project as it definitely presents a uniquely abrasive tone to it that you don’t really hear anymore in music let alone Hip Hop so I want to keep as much as I can for a surprise.
But as a whole, this is an album worth checking out if you’re looking for something different and more down to earth then I honestly wouldn’t know what other album would do the trick!
If you’re a Metal fan give this a go, if you’re a Hip Hop fan also give this a go, I’m pretty sure there’s something there for everyone to enjoy! -Corban Skipwith
Lineup:
Oddateee: Voices and texts
Pink Room: Flute, improvised noise & music with synthesizers
Grosso Gadgetto: Improvised music with sculpture modeling synth, orchestration and mixing
Track list:
1. Birth
2. 13
3. Once Upon A Hood
4. Timeline
5. Final Tape (bonus track)
'
Relentless Reviews With Corbz
Posted by Dave Wolff at 1:14 AM