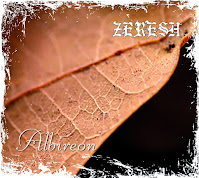 Band: Alberion
Country: Italy
Band: Zeresh
Country: Israel
Full Length: No Longer Mourn For Me
Format: Digital album, limited edition CD
Label: Toten Schwan Records
Release date: May 4, 2021
It would be unfair to describe this split by Zeresh and Alberion simply as dark and apocalyptic. As much as those descriptions are fitting, they would call attention to the celebration of the purest romantic love, free of guilt from a world that doesn’t understand the nature of what they’re sharing. The music these psychedelic neofolk projects compose have gloomy themes which suggest the emptiness of hundreds of years past, like a decaying sixteenth century mansion in some isolated location the rest of the world forgot long ago, but the spirits of the lovers who dwelled there are still present. As heaven left them with no one but each other for company, this gave them a mutual bond that couldn’t be broken by many eternities. With multiple layers of dual vocals, profound lyrics, spoken word passages, acoustic guitars, keyboards and atmosphere, “No Longer Mourn For Me” is described as being “spacious and claustrophobic at the same time”, which consummately describes the vibes between these two projects. As you listen you feel immense emptiness and spiritual lifelessness surrounding the two “characters” the artists personify, but their devotion is enough to fill the world. “No Longer Mourn For Me” takes the gothic death metal explored by My Dying Bride on “Turn Loose The Swans” and greatly revamps and improves upon its plaintive longing. These artists write an album with a feel of classic sixteenth century literature, inviting you to visualize Renaissance era settings, settings of perished and decaying homes, fields of dead flowers choked by weeds and ivy, an abandoned Renaissance town at sunset. Yet somewhere something is not quite completely unremembered, in hiding but very much alive. Or is it? Maybe the impressions I picked up are little more than distant memories, as Tamar says her lyrics are written about the end of intimacy and the inability to accept parting. This fits the pictures of decay more closely and turns the tale of condemned lovers to a tragedy. However it speaks to you, “No Longer Mourn For Me” is so much like a piece of classic fiction you’ll feel deeply immersed in it. –Dave Wolff
Lineup:
[Albireon]
Davide Borghi: Vocals, acoustic and electric guitars, samples
Carlo Baja Guarienti: Keyboards
Stefano Romagnoli: Loops, samples
Tamar Singer: Guest Vocals on “Heartbroken Romance” and “The Day You Powered Your Wasted Dreams In My Heart”