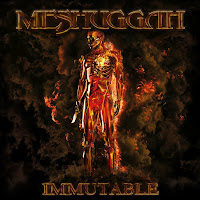 Band: Meshuggah
Country: Sweden
Genre: Groove/thrash metal, djent
Full Length: Immutable
Format: Digital album
Label: Atomic Fire Records
Release date: April 1, 2022
Since Meshuggah began, they've never stepped back from their heaviness nor compromised when it came to challenging standards of songwriting, showing that you don't have to be an elitist to soften up. Since they developed their own standards instead of attempting to fit in with others, the rewards they’ve received should inspire musicians everywhere.
"Immutable" is the band's first album not released through Nuclear Blast Records and it's been about six years since they released new material. This period of inactivity may have contributed to the change in the band's sound, adding some minimalist drone to the downtuned dissonance that has been their trademark from their debut album onward.
It depends on your own musical preferences whether the greater emphasis on unvaried pitch makes "Immutable" more striking or more tedious. As someone who is basically unbiased towards underground music, Meshuggah's approach to this album gives it a heavier, overall more primeval ambience in which they’re redefining their technique. It reminds me in some ways of Sepultura modifying their sound on “Chaos A.D.” and “Roots”. It takes some getting accustomed to but eventually hooks you in.
That's not to say that they've abandoned jazz fusion and off time rhythms. The enhanced primal feel of "Immutable" allows for greater climate profundity and more contrast in themes. In this regard, it is the nine-minute instrumental "They Move Below" that stands out as a musical saga in and of itself. This is a clear example of the band growing and reinventing themselves all over again. After more than thirty years they can do things with their instruments that leave you wondering how they achieved such tricks.
In addition to Sepultura earlier in this review, there were moments in "Immutable" that made me think of Tool and Napalm Death, and as the album progressed it became more heavy, atmospheric, and jazzy. It was as if the energy Meshuggah collected for the album was gaining momentum, building so much engulfing intensity that it would ultimately turn your brain cells to powder.
The turning point was reached with "Kaleidoscope," which sounded recorded with more distortion than the previous tracks. As much as it was disturbing, it was energizing. The following two-minute instrumental “Black Cathedral” sounded closer to Swedish black metal than anything Meshuggah had done until now, but the guitar sound was consistent with the preceding songs.
In addition to the guitar solos and especially the lead vocals, this recording has more of that contrast I mentioned earlier. The former seems to operate within unorthodox, complex scales to give the songs an uncanny, mystical inclination; the latter pretty much remains consistent in its raspy aggression from the first track to the final track. This can work or not depending on the vocalist’s presence and the backing music. It works here because everything fits together like an impenetrable wall of sound.
“Past Tense” is the album’s third instrumental and final track, ending “Immutable” on a somber note. The lone guitars are a counterpoint to the mounting energy that built and culminated with “Armies Of The Preposterous”. It was like the still after the storm, the destruction witnessed in the wake of a devastatingly violent conflict. Altogether, "Immutable" may or may not equal what you’re used to from Meshuggah, but give it a chance and you may get something out of it. –Dave Wolff
Lineup:
Jens Kidman: Vocals
Fredrik Thordendal: Guitars
Mårten Hagström: Guitars, songwriting, lyrics
Dick Lövgren: Bass, songwriting
Tomas Haake: Drums, songwriting, lyrics
Track list:
1. Broken Cog
2. The Abysmal Eye
3. Light the Shortening Fuse
4. Phantoms
5. Ligature Marks
6. God He Sees in Mirrors
7. They Move Below
8. Kaleidoscope
9. Black Cathedral
10. I Am That Thirst
11. The Faultless
12. Armies of the Preposterous
13. Past Tense