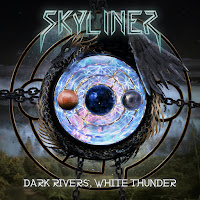 Band: Skyliner
Location: Jacksonville, Florida
Country: USA
Genre: Heavy/power/progressive metal
Full Length: Dark Rivers, White Thunder
Format: Digital, CD
Label: Alchemic Visions
Release date: January 30, 2021
Welcome back everyone! We are back with another album review and this time we are taking a wild journey back to January of 2021 where the band Skyliner released their new album. And with eleven new and exciting tracks this thing is sure to make a cosmic level impact!
The first thing I noticed about this record was how ‘classic’ it feels without it even being out that long, and when I say ‘classic’ I’m referring to how nostalgic it feels, representing the sounds of the 80’s and early 90’s with a more ‘earthy’ twist.
What I find interesting is that this band incorporates some hints of ‘meditative’ sounds combined with some light ambient inspired aesthetics which gives this record that extra oomph to separate it from everything else on the market (instrumentally speaking).
At any given moment this record can switch between so many different sounds and inspirations such as
-Speed metal
-Melodic Metal
-Classic Heavy Metal
-Power Metal
-Groove Metal
-Math Rock
And all this is a testament to how talented the band members are here to be able to play so many different styles without even breaking a sweat, shout out to that band for that!
Let’s talk about what I feel is the ‘Dark Horse’ of the record and that’s the vocalist ‘Jake Starseeker’ (by the way if that’s his real last name, that is so badass) but anyway his vocals on this record are nothing short of unreal! He impresses me so much because he has that Dio, Rob Helford, Bruce Dickinson, Ian Gillan type power and energy behind him with those high pitch notes being hit so well and then surprisingly also able to solid growls and screams!! (talk about an all-rounder)
Point I’m trying to make here is, even though this isn’t a new album it’s a bloody good one! One with lots of passion, creativity, technicality and energy! You don’t want to miss out on this one! -Corban Skipwith
Lineup:
Jake Starseeker: Vocals, guitars, banjo
Stuart Brinkman: Bass
Benjamin Brenner: Drums, percussion (cajon, djembe, triangle, tambourine, shakers, rain stick)
Track list:
1. Break The Surface
2. Dark Rivers, White Thunder
3. The Ghost Messenger
4. God With No Heaven
5. Catch A Dream
6. One Solstice Night: The Singing Shaman (Fire Stomp)
7. One Solstice Night: Winter Witch Moon (Spell Of Ice)
8. We Of The Shadows
9. Bleed
10. Night Gypsies
11. I Walk Alone
Posted by Dave Wolff at 3:44 PM