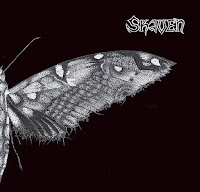 Band: Skaven
Location: Oakland, California
Country: USA
Genre: Crust, sludge, metal
Full Length: Discography
Format: Digital, 12” purple vinyl
Label: Ruin Nation Records (Bremen, Germany)
Release date: May 23, 2014
Ladies and gentlemen, boys and girls people of all ages I have a confession to make, this is the first time I’ve been made aware of the sub-genre of ‘Crust’ (Yes I know, as a music journalist as prolific as myself that’s inexcusable) but I’m here to redeem myself by giving my unfiltered five cents on the matter.
So this album was released in 2014 and features eight devastating that’s entire purpose of creation was to melt your face off the existence of the planet (but I ramble).
To me, ‘Crust’ is an interesting combination of ‘Hardcore Punk’ and ‘Death/Grind’. You can hear the individual elements which I think is awesome when you’re working with such explosive sounds as these you need to make sure they aren’t randomly jumbled up and messy, you want them to mesh like controlled chaos in a way and these guys do a perfect job at achieving this.
The various instrumentation is as grimy, brutal and sluggish as you would expect given the sub genres at hand, the guitar is methodical and unforgiving, the drums hit with bullet precision and with violent effect while the vocalist shows how to sound truly miserable and passionate all at the same time.
He has these wretched screams combined with these death growls that could rival the best in the ‘Black Metal’ or ‘Grindcore’ game, but in most songs underneath the different vocal styles you can hear that ‘Punk’ attitude and rebellious nature creep through the songs and manifest itself through him, and I think that’s one of the main things I love about these guys’ performances.
If you’re a fan of bands like
-Black Flag
-Dying Fetus
-Cannibal Corpse
-Nails
then you’ll love this record because it has the best qualities of all these sounds while still keeping themselves original and refreshing in execution, production and heaviness! Go check out the sonic violence down below. –Corban Skipwith
Lineup:
Zebediah: Lead vocals
Geoff Evans: Guitars
Shaner: Bass
Matusio: Bass, backing vocals
Ross: Drums
Track list:
1. Reflective Skin
2. Plague Wind
3. Abscess
4. Fleshy Curse
5. Like The Worms That Crawl The Earth
6. The Swarm
7. Severed
8. Flowers Of Flesh And Blood
Posted by Dave Wolff at 2:39 PM