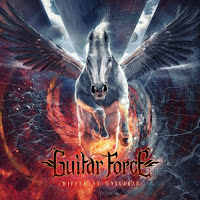 GUITAR FORCE
Different Universe
Inverse Records
http://www.facebook.com/GuitarForce
Hailing from south-east Poland, here we have a female fronted Iron Maiden-esque NWOBHM inspired band delivering straightforward traditional metal with rock influences. Production is a bit muddy although all instruments including violin can be heard. There is some nice guitar solo work on this release which complements the vocals, underpinned by solid timekeeping within the rhythm section. Standout tracks are ‘Punishment’ and ‘Nurt.’ The latter track shows how the band effectively manage to succeed in delivering the typical rock/metal ballad, delivering diversity to this release. At times the Iron Maiden/Paramore influence comes a little too close for my liking. In stating this, I am sure with progression and confidence the band will forge their own unique sound and identity. Vocal duties are interchanged on this release between songs and this is something I would like to see more of from this band as it gives fresh perspective on the songs performed. -Simon Brown
Track list:
1. To the End of the World with Ronin
2. Tribute
3. Punishment
4. Nurt
5. At the Crossroads
6. Magical Power
7. Without Names
8. Forever
9. Another World
10. White Lady
Posted by Dave Wolff at 1:17 PM