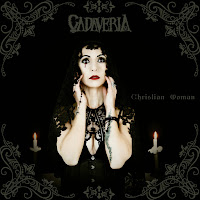 CADAVERIA
Christian Woman (Type O Negative cover)
Official Single Track
From the EP Mondoscuro out Feb. 20, 2017 on vinyl via Sleaszy Rider Records.
Previously released on CD (Sep. 2, 2016) via Black Tears.
Well this is interesting. I've come across these guys (and girls) before and liked their stuff. For those that haven't heard of them they sit somewhere near Cradle Of Filth, with some more cyber goth influences... I don't mind it at all. This is them doing a Type O Negative cover. I'm not going to say this is as good as the original but thankfully they haven't tried to replicate it either. It’s a different take on an awesome song with a much different sounding band mix. It's acutally much more of a solid upfront band mix (if that makes any sense) with more defined guitars and diffrent keyboard sounds. Some may feel that it changes the original feeling of the song and to I tend to agree, but thats not an entirely bad thing and obviously with female vocals interspersed with black metal vocals, it was never going to sound like a clone of the original song. Overall im going to say it's pretty cool and definitely worth checking out. -Reggae