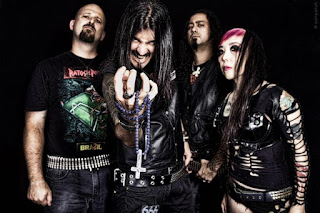 NERVOCHAOS
Ritualistic
From their forthcoming full length album Nyctophilia (Cogumelo/Greyhaze)
Directed by Angelo Rodrigues & Jackson Kleber
Filmed & edited by Adonai Filmes
Photography by Victor Ponce
Art direction by Lu Bueno
Color Grading by Marcelo Cosme
Nervo Chaos hail from Brazil and I have to say they have a crushing sound that is fairly accessible... which is a hard thing to combine. Formed in 96 the band has had limited output, but if nothing else at least the quality is right up there so that can be forgiven. They submitted a new song and clip to for consideration to AEA zine ahead of their album release in April, and I have to say I really like it. This song is more a standard death metal groove based song, but maaan these guys can go! There are not many death metal fans that wouldn't dig this as it covers all the bases without being so brutal that it alienates potential fans. This song did exactly what it was supposed to do, I am now interested in the band and now looking back on their past works with great interest. Upon letting Youtube do its thing I really like the song The Devils Work released a few years earlier and am now having a great time exploring their past works such as Ad Maiorem Satanae Glorium. Their video clips are quite accomplished affairs with some great special effects (remember this is an unknown band from South America) and I think they've done really well. I look forward with great interest to their full length coming out. Best thing I can say is have a look at their Youtube channel and sit back and enjoy this is a band with a great sound and huge audience potential. -Reggae