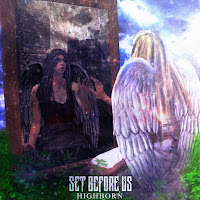 SET BEFORE US
Highborn
This new single from Sweden’s Set Before Us was released last February, and as an initial impression it makes good on their technical abilities and method of presenting them. With a surprise or two inventively planned, this single announces the arrival of a band giving every indication of having worked at their craft. I equally recommend visiting Set Before Us on Bandcamp and Youtube, as the former has their debut single (Wildfire) and two EPs (Voyagers, Enigmas) and the latter has a lyric video produced by Ignite Design (plus a new promotional clip, Earth Destroyer). There is something of a “modern” vibe introducing the track that lasts until its conclusion, it’s mostly in the lead and backing vocals (the backing vocals are by male and female vocalists; the female vocals reminded me of Otep) but some can be heard in the guitars when they start crunching. I perceived mid nineties Swedish melodic death metal at the root of the song though the band describe themselves as meralcore and cite Parkway Drive, Breakdown of Sanity and August Burns Red as influences. The modern and ninties themes are traded back and forth with conservative balance and double bass percussion pushing things along. The low guitar notes contribute a lot to the nineties feel, making it sound less diluted. Toward the end comes a section of female vocals that brought Theatre Of Tragedy to mind, followed by a sudden keyboard passage the band elected to conclude with for the sake of a dramatic exit. The lyrics are of reawakening into a world of “cold acid air”, pain and fear. Or in other words, an angel is born into a world unlike the heaven she seems to have come from. Considering the lyrics makes sense of the themes written into the song as heaven appears bleak and cold, and a being thought to be from a higher spiritual plane has a revelation of her true identity: not an angel at all but something malevolent who entered the physical world from elsewhere. To find out what her purpose is you’ll have to see how her tale develops in this clip. -Dave Wolff