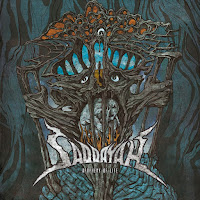 SADDAYAH
Apopheny Of Life
Loud Rage Music
Place of origin: Romania
Genre: Death metal
Recorded, mixed and mastered at I.V. Metal Foundry studio, Bucharest, Romania
Cover designed by Costin Chioreanu
Jewel-case CD with 12 page booklet available for ordering online
Release date: September 7, 2018
Loud Rage Music reveals to us a vision of death metal by the Romanian underground act Saddayah and their debut album Apopheny Of Life.
The track Apopheny Of Life begins with canonically minor death metal riffs, with acoustic pieces. It sounds confident and energetic. I was attracted by the track with the simple and conceptual title 8, and it was not in vain. The composition’s living, breathing structure varies from blast beat attacks with tremolo picking to groovy riffs with nonlethal technical metal. Crushing death metal riffs are replaced by acoustic parts and a tremendous solo, with an Eastern spirit with minor simple but expressive harmonies. The first single and the last track of the album Born In Singularity gives us nothing progressive or unusual, but an interesting, expressive picture of death metal. It’s an adrenaline-soaked composition with canonical death metal riffs, aggressive and powerful percussion and terrifying vocals.
Saddayah’s sound cannot be described as wholly original in influence or style, but it shows some forward thinking in its execution. Sitting with the heavier side of the technical metal spectrum with chromatic chord progressions, a varied song structure and death metal grooves and barks isn't a revolutionary concept, but Saddayah offers plenty of melodic layers beneath its chugging surface, and they sound assertive and confident.
Apopheny Of Life was recorded at Metal Foundry studio and the cover artwork is by well-known artist Costin Chioreanu. It's concept is about despair. It’s great to know they make their visual and music style similarly. It indicates a conscious and serious approach of the band. -Serafima Okuneva

Track list:
1. Apopheny of Life
2. Fire Above, Frost Below
3. Mouth of the Abyss
4. 8
5. King's Will
6. The Darkest Recess of the Human Mind
7. Born in Singularity
8. Carving in the Stone Flesh of God