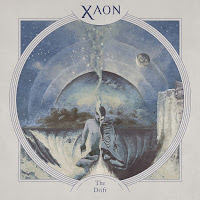 XAON
The Drift
Sliptrick Records
Place of origin: Sion, Switzerland
Genre: Symphonic death metal
Release date: May 15th, 2017
Xaon's first full length album The Drift is any metalhead's dream. Right from the start you know you're being summoned to leave your worldly worries at the proverbial door, then to step into this parallel universe. It's a symphony of sound and reverberation bouncing around right between your ears. Xaon enraptures all of the five senses and holds them captive until the very last note. They literally throw everything into the mix. Patiently we listen for the metallic lava to ultimately solidify. Which isn't hard for these tight-knit metal slingers to do. On a whole the album seems like a love letter to an impending apocalypse. It touches the psyche in a wonderfully morose way. The lyrics only exacerbate our enthralling curiosity. I could easily see any one of these songs being on the soundtrack of such a movie. Perhaps even the entire album. If only Hollywood were on my speed dial. I don't know about anyone else but I myself will be keeping an eye on this group. I'm learning all the time that Switzerland has a wealth of musical waves. Which is always nice to go swimming in. There you have it: The Good, The Bad and The Ugly. -James K. Blaylock