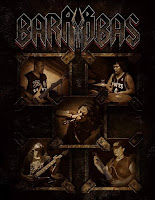 BARABBAS
Pataasan Ng Ihi
Mindplight Recordings
Place of origin: Philippines
Genre: Protest metal
Recorded and produced by Barabbas at Mindplight Recordings
Release date: August 1, 2018
Pataasan Ng Ihi is the latest single released by the Filipino band Barabbas, twenty year underground veterans who are still recording striking compositions. The single just came out on Bandcamp, though the song itself has been part of their repertoire for a few years. If you search on Youtube you’ll find live clips from 2015 and 2016. I’m going to choose the clip with the best audio-visual quality to link at the end of this article (recorded at 888 Bar & Resto in Pasay City, Philippines). Pataasan Ng Ihi is intended to be a commentary on the sociopolitical structure in the band’s home country, If I recall correctly I touched on this subject in older reviews, such as the review I wrote for Gapang's EP Mabagal, Mabigat At Madumi last April, but more research is to be done so I know what Barabbas is protesting against and why. By the way, Joy Legason the bassist for Barabbas is also the bassist/vocalist of Gapang, and the head of Mindplight Recordings as I indicated in the aforementioned review. Gapang is a doom/sludge metal band, but not typically so. And this band is not typical groove/death metal. The live videos I found on Youtube showcase the song as tight, groove laden death metal with tempo changes and a brief section with atmospheric guitars. On the new Bandcamp  single there are more than a few differences giving the song an entirely new flavor. This version of the song is somewhere between Sepultura and Bad Brains, with spoken word, vocal harmonies and a jazzy section replacing the atmospheric part in the live video. If you’ve been following the band’s activities for a long time you’ll hear the differences immediately, and newer listeners will see the new single as an improvement. For its intense edge and screeching vocals the production is clean and meticulous and shows the aptness Barabbas has acquired in two decades. For a local band they have potential to reach many more listeners abroad, and this is another song I would recommend to metal fans seeking something cutting edge. -Dave Wolff