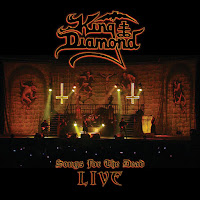 Band: KING DIAMOND
Place of origin: USA, Sweden
Genre: Heavy metal
Album: Songs For The Dead Live
Label: Metal Blade Records
Release date: January 25, 2019
Since he hasn’t recorded a new studio album in some time, King Diamond is planning to kick off the coming year with the next best thing. No new studio albums doesn’t indicate complete inactivity, as Diamond and his band have performed extensively in recent years. Two appearances have been filmed for posterity and his upcoming DVD/Blu-Ray Songs For The Dead Live. I’ve always counted on Diamond to deliver the goods; this time things are no different. Having a stable lineup for about fifteen years (with the exception of the bass spot, currently occupied by Pontus Egberg) has made the band even more professional than I remember them being. Songs For The Dead Live was filmed at the Filmore in Philadelphia, Pennsylvania in 2015 and Belgium’s 2016 Graspop Metal Meeting. Two appearances that were doubtless chosen from many. Classics spanning their career from Fatal Portrait (1986) to The Eye (1990), and of course a Mercyful Fate classic or two, appear here. You get Halloween. The Family Ghost, Welcome Home, Sleepless Nights, Eye Of The Witch and Melissa to name a few examples. Just from listening to the advance tracks from Metal Blade the songs are vital as ever, tempered by inclusion in countless sets. Metal Blade is promising innovative production from Denise Korycki (Wild Wind Studios) who reportedly did intensive work with Diamond to create a perspective akin to attending the shows with a full view of everything and providing POV shots you wouldn’t have expected to see. The prerelease bio, the complete concerts, the band’s delivery and the sound quality made me want to see what Korycki and Diamond had in mind when thinking of new ways to visually and aesthetically interpret these shows. The actors joining the band onstage and the gothic setting constructed for the backdrop add to the timeless impressions of Diamond’s live show, drawing the audience into each moment. In addition to DVD and Blu-Ray, Songs For The Dead Live is being released in several vinyl formats; the King Diamond Coven offers more information. -Dave Wolff