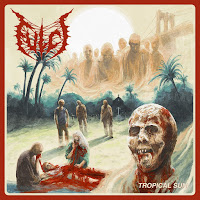 Band: FULCI
Location: Caserta, Campania
Country of origin: Italy
Genre: Brutal death metal
Track: Eye Full Of Maggots
From their upcoming album Tropical Sun to be released on Time To Kill Records May 31, 2019
Release date: April 23, 2019
Since I’m an enthusiast of eighties horror, gore and splatter, I jumped at the chance to listen to the premiere of Fulci’s second album. Tropical Sun is a conceptual opus based on Lucio Fulci’s 1979 film Zombie, still recognized as having broken new ground in horror. I should add the movie’s roots go even farther back, as its screenwriter Dardano Sacchetti penned the script (originally titled Nightmare Island) to homage The Walking Dead (1936), I Walked with a Zombie (1943) and Voodoo Island (1957). I always saw the darker tone of Zombie as a polar opposite of the social commentary of George Romero’s Dawn Of The Dead. Instead of commenting on corporate greed Fulci’s movie reflects the theme of the classics of the 30s, 40s and 50s telling a tale of reanimated corpses preying on the living after being awakened by a voodoo curse. The theme of mystery and menace, and the graphic gore, is reawakened with the old school death metal theme of Fulci. Considering the band comes from the same country as the director, it makes sense they’ll have a similar perception of horror as that of the movie. Italian horror cinema had an ambience not like American horror cinema. It was much more murky, inexorable and hard-line, like early death metal. The title of the first track from the new album calls to mind the iconic poster of Zombie, with the makeup effects created by Giannetto De Rossi, Maurizio Trani and Rosario Prestopino. At two and a half minutes in length the track is brief and to the point, presumably depicting the undead conquistador emerging from his grave before it takes a bite from the horrified woman watching it happen. The song’s presentation and delivery should remind you of old Necrophagia, Mortician, Obituary and Bolt Thrower; bands from death metal’s formative years. It’s well produced, with lots of crunch and double bass, with an occasional hint of death-thrash added. Refer to the Youtube link below for more information about the album. -Dave Wolff