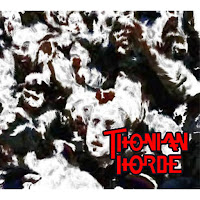 Band: THONIAN HORDE
Location: Boonsboro, Maryland
Country: USA
Genre: Black n roll, black metal
Full Length: Thonian Horde
Label: Independent
Format: Digital, streaming
Release date: July 22, 2016
After a day of visitations and barbecue, I am finally finding the time to thumb through some promo material. There are a handful of bands I plan to review in the near future, but one of the two that stuck out most to me would be this band, Thonian Horde. I threw on ''Thonian Horde'', the self-titled debut release from this vicious quartet, and a wave of turbulent black and roll washed over me with malicious fervor. Hailing from Maryland, USA, this band is elegantly grotesque and pushes forward with an onslaught of blackened carnage that can only be described as unlit mastery. The first thing I will mention is that the vocalist reminds me of my friend Sean Macintyre (also known as Sean Blackthorn). The style of higher pitched gutturals used by Thonian Horde is similar to what I have heard in the past from Sean, which is not an insult, as he is/was a sincerely talented vocalist. (Also, check out the band Nightfall. Yes, I am shamelessly promoting my friend's band). Although all the instruments brought to light by Thonian Horde seem to be top tier, the thing that stands out most to me would be the wailing, shredding guitar solos. There is without a doubt a thrashy element to the string rips, and it flows nicely with the rest of the music overall. This album was recorded, engineered, and produced through April-July 2016 by Tim Otis and Thonian Horde, and was mastered by Matt Legrow. Thonian Horde logo & lyrics by R. McGinnis. All songs by Thonian Horde. This band is dark, intense, and I would honestly have it no other way this evening. Amazing tuneage, Brethren! -Devin Joseph Meaney
[Thonian Horde has since released two more full lengths, “Inconnu” and “Downfall.” -DW}