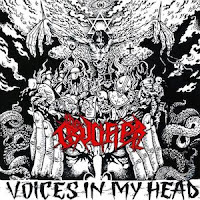 Band: THE CRUCIFIER
Location: Athens, Attica
Country: Greece
Genre: Thrash metal
Full Length: Voices in my Head
Label: Punishment 18 Records
Format: CD, streaming
Release date: September 5, 2017
Taking in the intensity this Greek band channels on “Voices in my Head”, I guess they must ingest loads of speed and uppers before going onstage to perform live. The best modern thrash albums are always those that reawaken the genre’s heyday without trying. The days when bands stripped metal to its primal nature as Black Sabbath had done, then pushed it beyond the limits of what they were capable of. If you understood the point, you forgot about bands who looked pretty in favor of bands whose “image” was repulsive or frightening as their music was perceived to be in the world of new wave and MTV. “Voices in my Head” is The Crucifier’s third full length amidst many demos and split releases (with Violent Attack, Disaster, Crimson Steel, Bywar, Hate Your Fate and Wanton Decay). It’s somewhere between the ugly genesis of thrash and the time it was taking itself to its full development to the point where people aboveground had no choice to see its capabilities. The Crucifier have been active since their 1995 debut demo, and if they’re not at the forefront of Greek thrash after their twenty years of experience they should be. Playing dirty, technical and utterly fervent thrash, they understand as well as bands from Germany and Southern California that what’s most important about writing a song is the zealousness and compelling emotion channeled into each note. This point is made clear from the first track “Within Insanity” which presents the crunch of Exodus and Testament with the skillful scales and tight drum sound of Destruction and Kreator. The band sounds like they were around when those bands were releasing landmarks like “Bonded by Blood”, “The Legacy”, “Infernal Overkill” and “Pleasure To Kill”. “Open Your Eyes”, “Forgive and Don’t Forget”, “Imaginary God” and “Fake Truth” are as raw and tight as anything from those albums. I should mention having heard minor but noticeable shades of hardcore-thrash crossover in the songs; as much as the songwriting I heard it in the lead and backing vocals which packed aggression without testosterone. Another band I should mention similarities to is Znowhite (later Cyclone Temple), one of the most underrated 80s thrash bands. More than once the crunch in the guitars reminded me of the riffs Greg Fulton composed for their songs. So I’m more or less done raving about this album for now; check it out if you’re an old school thrasher who wants something more than simple nostalgia. -Dave Wolff