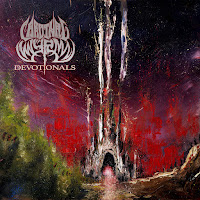 Band: Cardinal Wyrm
Location: Oakland, California
Country: USA
Genre: Doom metal
Full Length: Devotionals
Format: Digital album, limited edition cassette
Label: Independent
Release date: December 11, 2020
I appreciated “Devotionals” immediately as I started listening to it. If nothing else, it was for the effort Cardinal Wyrm put into bending doom metal with gritty psychedelia, grunge, prog rock, black metal, hardcore and avant garde goth metal, and most of all storytelling. If you thought Notre Dame and Charmand Grimloch’s Tartaros are bizarre I suggest you check this album out, or anything Cardinal Wyrm has released since 2013’s “Another Holy Trinity.”
It hasn’t even been out a month and it’s already receiving praise from Blabbermouth, MeatMeadMetal, Last Rites and The Obelisk. After seven years of experimenting on albums like “Black Hole Gods” and “Cast Away Souls,” the band sought to return to their origins in the DIY ethic, hence the album’s title, and reviewers seem to be catching this drift quite easily. During the writing and recording process they made a point of making an album that would speak to the listener’s sense of independence and individuality.
The band worked to achieve this by creating on their own terms, and from emotions they felt from deep within their souls, despite the ire and resentment that statements like this are too often greeted with. Usually by those who believe they know better when it comes to what makes a band popular. Cardinal Wyrm consider themselves fanatical about being themselves and doing what others would normally consider impossible. And they wear this attitude on their sleeves to blatantly it’s rather difficult not to relate to it.
This attitude certainly works for me as “Devotionals” is so unconventional, progressive, intricate, spiritual and hauntingly immersive it reignites my passion for doom metal, making me want to seek more bands to discover originality and creativity from. If you’re expecting plodding, repetitive songs prepare to be shocked beyond belief by an album of musical theater without a stage set or costumes. Their songs are schizophrenic, unpredictable hymns to madness written by musicians who traveled as far as they could to the brink without continuing to whatever awaits beyond.
“Devotionals” displays the griminess of doom metal, but the similarities stop there. Right from the beginning the material suggests something strange and far-reaching is at hand. From there the songwriting, vocals, guitar solos and choral sections seek to demolish every boundary that has been established in doom metal since the 1980s. Their energy and artfulness is in their ability to tell tales through their lyrics as much as the musical backdrops to them, drawing on mythology, legends of selling one’s soul to the devil, tales of encountering mirages and feelings of facing an uncertain future.
With “Devotionals” Cardinal Wyrm has created an album that reflects the times we’re in. And if they continue to experiment on their next full length and beyond they’ll prove it fakes a slow, gradual climb to make a difference in popular music, as opposed to choosing the easier options. –Dave Wolff