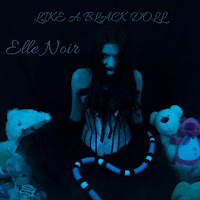 Band: Elle Noir
Country: Italy
Genre: Gothic metal
Single: Like A Black Doll
From the full length “Like A Black Doll” released by DTM Music Production November 27, 2020. Also available as a video.
Format: Streaming
Label: DTM Music Production
Release date: October 29, 2020
Elle Noir is an Italian Gothic singer who recently released “Like A Black Doll” in November 2020. “Like a Black Doll” is the namesake single of her EP “Like a Black Doll”.
Lyrical content of Elle’s music is always autobiographical with death, mental illness and emotional states of discomfort being primary focuses in her music.
With “Like a Black Doll” being both a single and a film clip- the initial montage of stuffed animals covered in spider webs accompanied by ambient and horror influenced sound and lyrics complement each other in a visual and musical manner.
The use of clean female vocals by Elle Noir is very reminiscent of Alice Cooper and Lydia lunch shoots to a montage of Elle before switching to a slightly darker tone both lyrically and visually- with the darker tone taking over and a confused vibe to the vocals. The distorted guitars come in halfway through this track and adds a hypnotic gothic rock vibe.
The visual aspect of Elle Noir appearing to be controlled toward the end like a puppet and the switch between the “sweet” visuals and the “darker” visuals allude to a darker meaning and add weight to the lyrics.
A catchy, raw doom influenced gothic rock track that will entrance and hypnotise you into a dreamy state- Elle Noir is perfect for those who enjoy gothic rock, with a heavier aspect and ambient tone. -Sarah McKellar and Obscvre